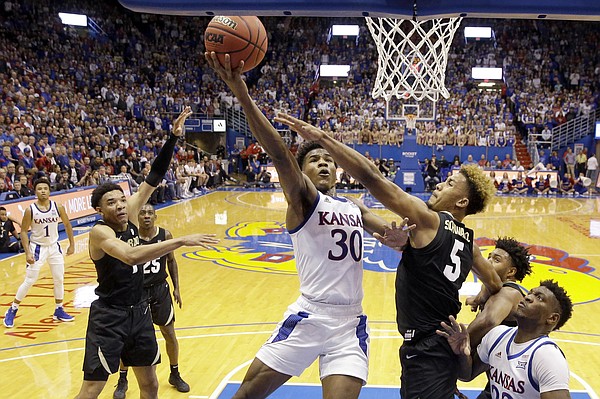 Kansas' Ochai Agbaji (30) gets past D'Shawn Schwartz (5) to shoot during the first half of an NCAA college basketball game Saturday, Dec. 7, 2019, in Lawrence, Kan. Kansas won 72-58. (AP Photo/Charlie Riedel) by Associated Press

1 – Ochai Agbaji – Hit 4 of 6 from 3-point range including one falling to the floor and into press row on the sideline, and finished with 20 points and 12 rebounds. Also showed great hustle and effort in getting on the floor and on the glass, which led to the offensive explosion.

2 – Devon Dotson – Scored 18 points, 6 assists and 2 steals in 36 minutes. Better than the numbers, though, he once again set the tone defensively and effort-wise. His back-to-back steals that led to four easy points in the second half unofficially put the game away.

3 – Udoka Azubuike – Made six of seven shots — many of them dunks — and finished with 12 points and six rebounds to go along with three big time blocks in 28 minutes.

4 – Marcus Garrett – Finished with four fouls and shot just 2-of-7 from the floor, but dished six assists and ripped four steals on a night when it looked like Garrett could get a steal whenever he wanted one. He does so many things so well that sometimes you don’t even notice. He continues to be KU’s best post-entry passer and is growing as a leader each week.

5 – Isaiah Moss – Shot 60% from the floor, 50% from 3-point range and grabbed three rebounds to go along with his eight points. His constantly improving health continues to lead to big opportunities for the veteran transfer who brings a certain element of calm to the KU lineup.

6 – Silvio De Sousa – By far his best game in a while. De Sousa was active, played hard and got on the glass for a pair of offensive rebounds. He finished with just two poitns and three rebounds in 11 minutes and fouled four times, but it was certainly a step in the right direction.

7 – David McCormack – After opening the game with three jumpers against Colorado’s 2-3 zone defense, McCormack logged just nine more minutes the rest of the night, with a couple of them coming in garbage time. He finished 3-of-7 from the floor and grabbed two rebounds to go along with three turnovers.

8 – Tristan Enaruna – The five rebounds saved an otherwise forgettable night. He shot 1-of-3 from the floor, missed his only free throw and turned it over three times in 11+ minutes.

9 – Christian Braun – One turnover, one foul and one steal in nine minutes. He’s still not quite there, but the coaches and his teammates remain confident that someday soon he’ll turn the corner and become a contributor for this team.

I think it was Silvio that set one of those Big clear out screens for a highlight drive to the basket. Bigs should be able to get an assist on plays like that. One of those unstatted parts of the game that are so important to our success.