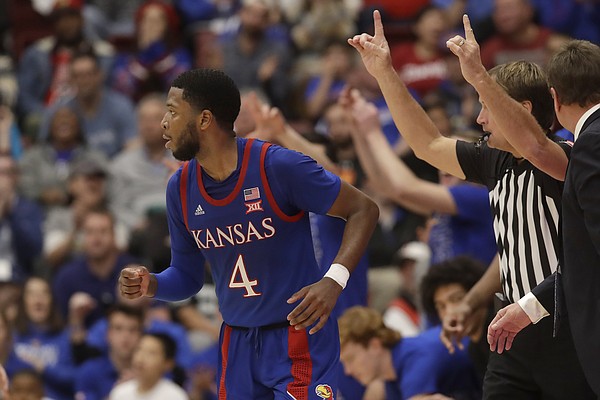 1 – Isaiah Moss – Hit 6-of-12 from the floor and 4 of 7 from 3-point range to lead the Jayhawks with 17 points in 27 minutes. Moss, who was much more active on both ends in this one, started the second half and added three rebounds and an assist to his line.

2 – Marcus Garrett – Back in the starting lineup as if nothing ever happened to his injured ankle, Garrett looked fine from start to finish in this one, cutting, driving and going to the glass like he always does. Finished with 12 points, 5 rebounds and 4 assists.

3 – Christian Braun – Hit 3 of 4 3-pointers — all at key times — and came up with several of those hustle plays and possession thefts that KU coach Bill Self raved about throughout the summer. That’s three strong outings in a row for the KU freshman.

4 – Udoka Azubuike – Miss all five of his free throw attempts, turned it over five times and scored just 2 points. But his 13 rebounds were big and the KU center was much more active and aggressive than he was in the recent loss to Villanova.

5 – Ochai Agbaji – Scored 14 points on 5-of-11 shooting and looked more comfortable than ever in transition. Active defensively and purposeful on offense, Agbaji was solid throughout the game in a team-high 33 minutes.

6 – Devon Dotson – Not his best game from an offensive perspective, but even still, Dotson managed to prove that he was the fastest player on the floor and the toughest to stay in front of. Foul trouble and turnovers plagued him throughout this one, but he finished with 14 points and four steals in 33 minutes.

7 – Tristan Enaruna – Logged 12 key minutes as KU all but abandoned its two big man approach in the second half of this game. Finished with three rebounds and two turnovers while also making his only shot attempt.

8 – David McCormack – Three turnovers in 11 minutes and an 0-for-1 clip from the floor. Managed two rebounds and a steal but also fouled twice.

9 – Silvio De Sousa – With McCormack a little off and Azubuike managing foul trouble, De Sousa got a fair crack at playing the 5 for a few minutes. But instead of taking advantage of it, he fouled twice, turned it over once and made one of two shots from the floor.

I'll have to admit, I would've thought that Silvio De Sousa would've been a PTP this season (after being with the program for the past 2.5 seasons). I'm amazed that he hasn't progressed towards competing for starting minutes. One just never knows how a player will either progress or regress. Talent wise, the team is very well balanced. As far as ranking goes, in my earlier years I got excited about the pre-season and regular season rankings. Now, I just say, you want to be #1 that first week in April. Because, that's all that really matters in NCAA Basketball. Focus on the main season Goal, now the individual game wars.

Saw him yawning on the bench.