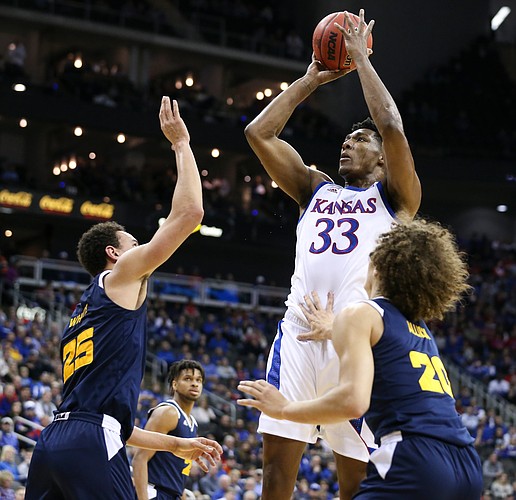 Kansas forward David McCormack (33) pulls up for a shot against UMKC forward Javan White (25) and UMKC forward Josiah Allick (20) during the first half, Saturday, Dec. 14, 2019 at Sprint Center in Kansas City, Mo. by Nick Krug

1 – David McCormack – The big time stat line was nice, but it was McCormack’s energy early that Kansas needed most. Behind stretches of pure effort and hustle, McCormack rumbled to 16 first-half points in 11:27 and finished the game with a career-high 28 points.

2 – Udoka Azubuike – Before McCormack got going, Azubuike was KU’s best player in this one, particularly on the defensive end. There were moments when Azubuike did what Azubuike does, dunking with power and ease, but he also finished with five rebounds, four assists and three blocks.

3 – Devon Dotson – He’s had better games, but the standard is pretty high for KU’s sophomore point guard who finished with 18 points on 7-of-12 shooting in 28 minutes. He also added three steals, two of them coming in the first half when KU built 19 points worth of separation by the break.

5 – Ochai Agbaji – Was nearly scoreless for most of the game but that was more the result of what his teammates were doing than anything Agbaji did. No point in scoring big when your team doesn’t need you to.

6 – Silvio De Sousa – It was a rough first half for the KU junior, but he turned into a bully in the second half. De Sousa looked much more comfortable and also stronger while riding out the easy victory.

7 – Christian Braun – Got the highlight dunk he wanted in front of so many friends and family members late in the game. Finished with a hard-earned stat line of 4 points, 7 rebounds and 3 assists in 20 minutes.

8 – Isaiah Moss – Made just 1 of 5 attempt from 3-point range but had one nice drive and finish at the rim in 19 minutes.

9 – Tristan Enaruna – Shot 1-of-10 from the floor on a forgettable offensive night. Added five rebounds to make up for some of the misses.