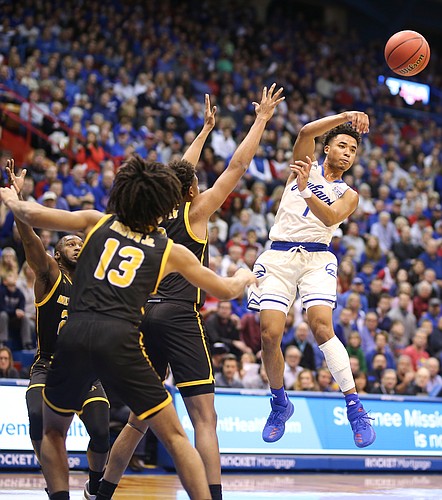 Kansas guard Devon Dotson (1) throws a pass to the wing during the first half, Tuesday, Dec. 10, 2019 at Allen Fieldhouse. by Nick Krug

1 – Devon Dotson – Got things going early as a distributor and never stopped. Finished with 22 points and nine assists after yet another monster night.

2 – Ochai Agbaji – Scored 22 points on just nine shots, including a 5-of-8 clip from 3-point range. Added eight rebounds and three assists in his 34 minutes to put back-to-back big time games on his stat sheet after a relatively slow start to the season.

3 – Udoka Azubuike – After hearing about how the KU big men have not played big of late — especially on the glass — Azubuike went out and grabbed 17 rebounds (four on the offensive end) to tally another double-double with 15 points on 7-of-7 shooting in 28 minutes.

4 – Marcus Garrett – Six points and seven assists against one turnover in 28 minutes.

5 – Isaiah Moss – Did what he’s out there to do. Knocked down a couple of 3-pointers and helped provide eight points off the bench.

6 – Silvio De Sousa – Played 11 minutes, which seemed like 40, and picked up where he left off against Colorado, active, aggressive and improved from his season-opening slump. There’s still a lot of room to go for De Sousa, who hit 4-of-6 free throws and grabbed six rebounds, but, overall, this was another good step forward.

7 – David McCormack – Made 3-of-5 jumpers from the floor — most of them good shots — but connected on just 1-of-4 from the free throw line and finished with a single rebound.

8 – Tristan Enaruna – Shot 2-of-3 from the floor for four points, but didn’t do much else on the stat sheet and often looked passive and tentative on both offense and defense.

9 – Christian Braun – Got extended minutes and had a look at a bunch of open shots. Just couldn’t get any of them to fall, finishing 1-of-5 from the floor.