Ben McLemore easy pick for No. 1 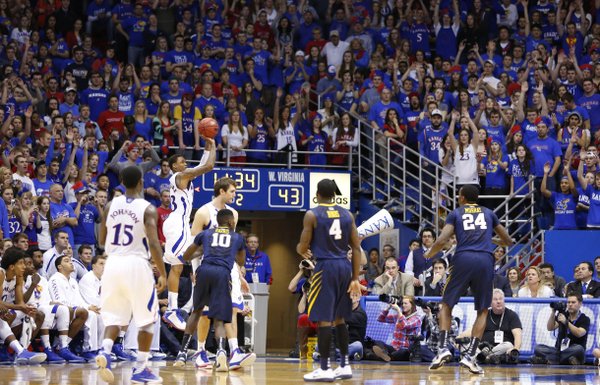 Kansas guard Ben McLemore puts up a three in the corner against West Virginia during the second half on Saturday, March 2, 2013 at Allen Fieldhouse. by Nick Krug

1. Ben McLemore: The freshman scored 36 points on just 15 field-goal attempts, making 12 of 15 shots and seven of nine free throws. With the outburst, McLemore broke KU's freshman scoring record set 28 years earlier (to the day) by Danny Manning. McLemore looked like an NBA player shooting jumpers, and in a few short months, he will be. McLemore added seven rebounds, four assists and a steal to go with two turnovers in 30 minutes.

2. Jeff Withey: The senior was robbed of a triple-double by a ticky-tack foul, but he still had a suffocating defensive performance. Withey had 14 points on 7-for-8 shooting while making three of his four two-point jumpshots. He also had 10 rebounds and nine blocks in his 32 minutes.

3. Elijah Johnson: Fresh off a 39-point game against Iowa State on Monday, Johnson looks like a completely different player confidence-wise. He also looks bouncier, as evidenced by his alley-oop and-one off a high feed from Naadir Tharpe in the second half. Johnson posted his second double-double of the year with 12 points and 10 assists to go with four turnovers. He also had a game-changing hustle block in the first half and never hesitated to shoot three-pointers, making three of his four long-range tries.

4. Naadir Tharpe: Johnson isn't the only KU guard that's played well recently. Tharpe quietly had a great game for KU, posting eight points with six assists and no turnovers in 19 minutes. His points didn't come off a lot of shot attempts either, as he was 3-for-5 from the floor and 2-for-2 from three-point range. It was only the second time in Big 12 play this year that Tharpe has shot better than 50 percent from the floor.

5. Kevin Young: Young provided KU with his normal hustle plays, diving three times in a row to force a jump-ball in the first half while also finishing three different lobs with slams. The senior, who scored his 1,000th career point, posted six points on 3-for-4 shooting with two rebounds, four assists, three blocks and two steals to go with a turnover in 28 minutes.

6. Travis Releford: If Releford had to pick a game to go cold from the three-point line, this would have been a good one to pick. The senior had a rare inefficient night, contributing six points on 2-for-8 shooting that included 0-for-3 accuracy from three-point range. He also had no rebounds for the first time this season.

7. Andrew White III: Had two points on 1-for-3 shooting with three rebounds, which is good production considering he played only two minutes.

8. Rio Adams: Made one of two field goals and finished with two points, though he did miss a pair of free throws in three minutes.

10. Perry Ellis: After an encouraging effort against Iowa State, Ellis didn't play well against a physical team in West Virginia. The freshman had two points, missed both of his field-goal attempts and added two rebounds to go with a turnover in just seven minutes.

Ben Mac!!! Im watching Espn after the game. Those guys talking about Miami and Indiana being the best teams. I say not likely. If KU keeps streaking and peaking, pencil them in for a Final Four. Also, Marcus Smart isnt the best freshman player.

I wouldn't even think about penciling KU into the Final 4 considering McLemore's struggles away from home.

However, I will agree with your premise. I don't know if Lulufulu85 has seen Indiana or Miami play this year, but both have looked outstanding to me.

If our guards play well in the NCAA Tournament, we'll go at least to the Elite 8. What worries me is that our guard play has been fairly inconsistent, especially away from home. Hopefully our guards are hitting their stride at the right time.

and you call yourself a KU fan? Bad bad rubber piggy!

I agree Ben Mc Lamore has not proven he can play away from the field house. One thing is for sure he won't be playing in a hostle environment like the Big 12 during March Madness. Maybe being on a neutral court will help his play away from the field house. Ben is a great player but he really needs to work on his left hand it's nowhere to be found.

Andrew Wiggins visit up next vs. TTU.

Ooooh! And Senior night!! Wiggins will likely be negotiating his first contract extension by the time his class graduates, but there is no greater love shown between players and the Uni, than on Sr Night. It tends to be a great show by the team as well. Wasn't it 80-40 or something like that in '08?

If that's your prediction, are you sure they'll get in the 50's?

Agree on the rankings even though pretty harsh on P & J. Still, I haven't seen a KU player who makes as big a difference as Withey. All season long, when he sits the game changes completely. Also we're not a great passing team and he has good hands even in transition.

And he's tough. And he keeps improving. Wow.

Jamari should be moved up a few notches just for his alley-oop pass to Kevin.

A rather unexpected game by Travis today.

The scouting report probably led to WV focusing on him knowing he had averaged 16 points a game in the last 4. Nonetheless, two back to back games where two guys step it up big. Releford really isn't the x-factor and he brought the ball up as the point guard a lot today. That might be to free up EJ who had a solid game with a double double the hard way. 12 points and 10 assists. I'd chalk this up to great coaching by Bill Self. Releford had a different role today than he normally has had. I wouldn't get down on him. Sometimes it's how the one-on-one match ups shape up. He'll be good down the stretch here.

To add to jayhawkintx1973, I think teams are picking their poison (Travis) and that help BMac step up. I really am not worried about BMac's road performance because I think those teams where focusing their defenses on him which opens Travis up.

Isn't it a fabulous luxury that we have Multiple players that can just go off at anytime, and yes, 1973 & 702 has it absolutely correct. Different focus by our team and the opponent will lead to very different scoring, but it is all good and contributing to the end result.

I'd also agree that the ranks seem a bit harsh on Perry and Jamari. They were in meaningful minutes, not mop time. That being said, Perry's (lack of) physicality showed in this game - in stark contrast to ISU. The good news though, is that Withey was pretty soft when he got here, but Coach has a way of developing that in his players over time. Perry will get there, and Jamari will be the ying to Perry's yang. So much to look forward to, even if Wiggins or Randle choose not to come.

I thought the flow of the game was great at times. However I did notice one thing that EJ has once again reverted to.....he drives, jumps in the air, and has no clue what to do with the ball. Last game he took it to the basket and scored, but with the WV trees, he couldnt do that. I think it is a bad habit, and it reminds me of a past KU point that had the front line to cover his behind when he did it. Just thought that was the only bad in this game and hope the trend doesnt continue....

Hey, where is Evan Manning?

Walk-ons don't get points in these ratings.

Young's 1000 must include his LMU years, right? Either way, he is a great fit for this team.

Liked what I saw from Adams yesterday. More PT will go a long way for this kid and he will get there quickly

Reminds me a bit of RussRob as a freshman. Out of control on the floor, but lots of speed and defensive potential.