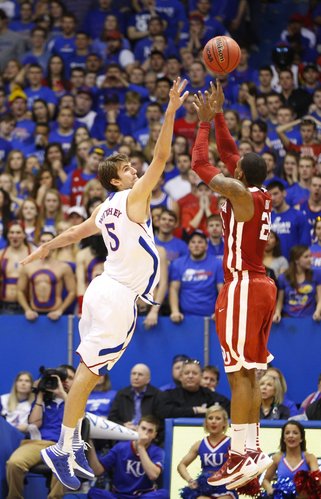 Kansas center Jeff Withey extends to defend against a shot from Oklahoma forward Romero Osby during the first half on Saturday, Jan. 26, 2013 at Allen Fieldhouse. by Nick Krug

1. Jeff Withey: The senior center remains as the team's most valuable player because of his impact on the defensive end. Oklahoma's Romero Osby hadn't shot worse than 50 percent in any of his last 10 games. Against Withey, Osby was 4-for-16 from the floor, mustering just 12 points despite attempting the most shots he's taken this season. Withey also was impressive in help defense, contributing four blocks to go with three steals. Offensively, Withey posted 13 points on 6-for-11 shooting with nine rebounds in 34 minutes.

2. Ben McLemore: I'm not in the camp that McLemore needs to shot more shots just to shoot more shots. If he can see the rim from the three-point line, though, he might want to consider firing way. McLemore showed off his ultra-quick release in the second half, making three of four treys before finishing with a game-high 18 points on 5-for-10 shooting (3-for-5 from three overall). The freshman has now made 46 percent of his three-pointers this year (36 of 79) yet isn't even the team leader in long-range attempts (Elijah Johnson, 81).

3. Travis Releford: Followed a rough first half with a solid second half and was KU's best distributor. He also was part of the cavalry that bothered OU sharpshooter Steven Pledger (10 points, 4-for-8 shooting) on the defensive end. Releford filled up his stat line, posting 10 points, five rebounds, five assists, a block and a steal to go with three turnovers.

4. Kevin Young: Another game that Young didn't always look great but still managed to give KU solid statistical production. He continues to be an underrated rebounder, as he pulled down five caroms in just 21 minutes. He also had six points (3-for-7 shooting) and three steals to go with two turnovers.

5. Perry Ellis: Like Young, Ellis was a big factor on the glass in his limited time, pulling down five rebounds in 14 minutes. He also made a strong move, working through contact to put in a short jumper over a bigger defender. Ellis had two points on 1-for-2 shooting with a block and no turnovers. In 276 minutes this year, Ellis has turned it over just 11 times.

6. Naadir Tharpe: After finding himself deep in coach Bill Self's doghouse following some out-of-control drives in the first half, Tharpe bounced back with an impressive six minutes in the second half. His second-half numbers: eight points, 1-for-2 shooting, 1-for-1 three-point shooting, 5-for-6 free throw shooting, two assists, no turnovers. His final total was eight points on 1-for-5 shooting, but his free throw and assist contributions (four assists to two turnovers) make that number more a little easier to overlook.

7. Elijah Johnson: Had two horrible decisions against Oklahoma's second-half press, with Self saying afterwards that holding the ball above one's head when being trapped is a mistake that a senior point guard should not make. With his four turnovers Saturday, Johnson now has led the Jayhawks in turnovers in five of their last seven games. He hit a crucial three late and finished with eight points, but 3-for-8 from the floor and 2-for-6 from three still isn't an efficient line. Johnson tied for third on the team with just two assists in 26 minutes and also hurt his team by picking up two cheap fouls in the first half, which forced Self to use his bench for extended minutes.

8. Jamari Traylor: Lots of positives, only one negative for the freshman. Traylor made his only field goal, posted two points and had three rebounds and a block in 10 minutes. The lowlight was his free throw shooting, as neither of his two attempts were particularly close.

9. Rio Adams: When he first stepped on the court, Adams had one great defensive possession, sticking to his man while forcing a tough jumper that missed badly. After that, though, he committed a foul after getting beaten on a drive and missed his only shot in three minutes.

I'm surprised Adams has became our 2nd perimeter player off the bench instead of White.

Using Adams instead of White reflects who we need to replace – White is a fine wing, but not yet really a combo-guard. With both Trav and Ben on the floor, ball handling is needed more than scoring.

Defense is why Rio plays while White waits. Rio usually would be playing alongside one or the other of Tharpe and Johnson. He doesn't have to be the primary handler, but he provides tight defense which allows KU to rest two of the top 4 backcourt players (EJ, BMac, Rele, Naa)

Elijah had a rough game. I would have put Jamari ahead of him, for those turnovers alone.

Thanks for the big12 split, Jesse.

Anyone know why Justin Wesley has not played since before his injury?

Wesley doesn't play because he is the least skilled big man we have and is really just a scout team player like the rest of the walk-ons this year. There's no way he would take minutes from Withey, Young, or Ellis and Traylor has WAY more upside and shows flashes of the future that Wesley does not show.

Perry will start by mid-Feb. The bench keeps him hungry. As long as we are (capable of) winning, I'm guessing Self is more concerned about how Perry is performing compared to his potential and the teams need for the position by the end of the year, and less about comparing player to player.

Naadir's development/play this year makes me all the more confident in Coach's instruction/motivation. With the young potential on the bench, it makes me even excited about the potential after losing the starting five next year.

Rio is the next EJ, and his dance will keep him in Lawrence. The second 5 get to see (hear) first hand the benefit of staying in Lawrence for 4 or 5 years. They'll get their time, and a truck load of trophies along the way - regardless of freshmen minutes.

For a second I thought you were referring to Omar Wilkes, and that was offensive - no disrepect to Omar intended

Love what we're seeing out of Ellis lately. I know it's kind of weird to be stoked about a guy getting 2 points, but the move he made was strong, he's rebounding with tenacity, and his defense is quite a bit better than what we might expect from a wiry freshman.

Point guard play is really starting to worry me. Elijah & Tharpes inability to get to the paint and draw fouls is a problem. McLemore's glaring weakness (no handles cannot create for himself) is not good. I'm saying this in light of greatness and a deep March & April run. This team is very very good and their defense is fantastic, and I enjoy watching them. But I like to think the team can play for a National Title every year. Without improved guard play, I just don't think they will have what it takes this year.

Do you remember how many games Ty got them back into last year with his ability to draw fouls? They really need that.

I know I'm focusing on the negatives right now. My bad.

McLemore wouldn't be a projected top 3 pick if he had a glaring weakness.

Are you sure? Drafts are all about the pool of talent in the class. Just because he is the top 3 in the class does not mean he does not have weaknesses. He his not much of a ball handler and he doesn't move without the ball well enough yet. He'll get there. I'm just nitpicking him.

i don't think the offensive side of the guard play is the biggest impediment. perimeter play on defense is the real achilles heel, as will be obvious when we travel to ames.

I agree wholeheartedly about the point guard play. Posted a response to Boouk on another thread about EJ and my doubts that he'll elevate his game to where it was tourney time last year. I still think it was a bad move to bury Adams on the bench this year. Sure we see his mistakes when he does get into the games, but he has the most upside of any of the PGs on this year's squad and had he been allowed to play through those mistakes we might have had a real gem on our hands by now. Tharpe has made some nice strides to improve his game, which has thus softened the blow and pretty much quelled the Adams vs. Tharpe debate on here, but I would have liked to see the other scenario played out.

EJ having a good tournament last year was due, in large part, to Tyshawn drawing more attention when his game settled down. This year, we need a point player opponents have to concentrate on every possession. Between Elijah and Naadir, that may happen over the next six weeks.

I think Adams will be good as well, but he's too much of an offensive liability to be taking meaningful minutes from EJ and Tharpe.

Adams isn't 'taking' minutes – he's filling minutes they give away. He does alright at that, and his time will come, on both ends of the court.

To suggest that he needs more minutes to improve would suggest that he would be taking minutes from someone else... Hence, my comment. I'm well aware his minutes have only come thus far when EJ and Tharpe are in foul trouble or playing awfully.

If he doesn't drastically improve his shooting in the offseason I can't see him in the rotation next season with Frankamp, Greene, White, Seldon, Mason, and Tharpe. His shooting must improve if he wants to beat one of them out for PT.

I know that an all american first team doesn't always have a true center included. but after watching Indiana and Puke play only a couple of times I wouldn't trade Jeffhey.