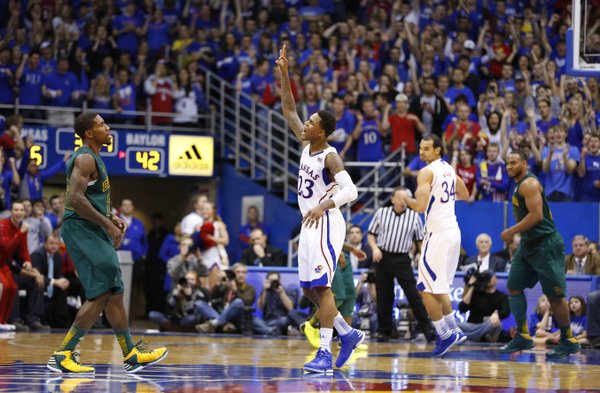 Kansas guard Ben McLemore holds up a three before Baylor guard A.J. Walton after hitting one late in the second half to widen the Jayhawks' lead on Monday, Jan. 14, 2013 at Allen Fieldhouse. by Nick Krug

1. Ben McLemore: The freshman stood out for more than just his offense Monday. McLemore led KU in points (17), rebounds (eight), steals (three) and was one off the team lead in blocks (two). He was tough inside, hustled for rebounds and wasn't afraid to scrap in the pile for loose balls. KU coach Bill Self said McLemore should only be out a few days with his sprained ankle, which is obviously good news for the Jayhawks going forward.

2. Elijah Johnson: The best game the senior has had in quite a while. After picking up two early fouls, Johnson found a rhythm Monday, scoring 12 points on 4-for-8 shooting (1-for-3 from three) with three rebounds in 25 minutes. He was aggressive on drives when he needed to be, which included a late-clock drive, layup and subsequent three-point play. He also defended well, serving as the primary defender that held BU's Pierre Jackson to a 2-for-12 shooting night. Johnson added an assist and steal to go with two turnovers.

3. Travis Releford: Very active defensively while shutting out BU's Brady Heslip on 0-for-3 shooting (0-for-1 from three). Releford had a pair of steals and was solid offensively, posting 10 points on 2-for-6 shooting with 6-for-6 accuracy from the free throw line. The senior added five rebounds, two assists and a block to go with two turnovers.

4. Jeff Withey: Didn't have a great game offensively, but he helped set the tone defensively by blocking shots and challenging everything at the rim. The senior posted eight points on 3-for-10 shooting to go with three blocks (seemed like more), one assist, one steal and two turnovers in 33 minutes.

5. Kevin Young: Couldn't get any of his close shots to go, but he still hustled his way to seven rebounds in 19 minutes. His high energy also forced at least two turnovers, as two Baylor players carelessly stepped out of bounds while Young was challenging them for rebounds. The senior had four points on 2-for-8 shooting with two blocks and a steal.

6. Perry Ellis: KU coach Bill Self was happy with the freshman's aggressiveness Monday. Ellis made just three of nine shots, but he still had six points and seven rebounds in 21 minutes. Because Ellis can score — off jump shots or the dribble — opponents have to come out to guard him, which means more open space for Withey when Ellis plays. The Wichita native added two assists, two blocks and a steal with two turnovers.

7. Jamari Traylor: The freshman somehow racked up three blocks in just seven minutes. He also had two points (1-for-1 shooting) with three rebounds.

8. Naadir Tharpe: Not his best game offensively, but he still deserves credit for playing good defense on Jackson, especially in the first half when Johnson went out with two fouls. Tharpe had two points on 1-for-6 shooting, missed all four of his threes and added just one assist with three turnovers.

9. Andrew White III: Had one rebound in three minutes.

So glad Perry Ellis had a strong performance. He looked more confident and smiled once or twice. (Except at the FT line)

Those two FTs were brutal to watch. Not sure what caused those or that ugly airball from the baseline - he's got a nice shot, but he must've been sped up or too amped up. He puts in such great effort, it's only a matter of time before he smooths out & gets the hang of it. For the team's benefit it will hopefully be by tournament time instead of by next season.

I was surprised by how well Tharpe defended Pierre Jackson. Tharpe has come a long way; if he would only stop jacking up so many bad outside shots...

Ellis still needs to finish strong at the rim. He is settling for jump shots. He needs to be aggressive at the rim.

Ellis has a move that he uses often. He gets the ball with his back to the rim. A favorite move is his right reverse pivot towards the goal for a shot. In conference play that move has been dissected and scouted. He charges into Auston and looks like a freshman doing it. Yet, he is staying on the court and has realized there are some things he can do because of his size. Minutes keep going up and more close ins will go in. He will learn to finish. On defense he is now an asset. Same thing with Young. It is so shocking to see how good Kevin Young is against bigger athletes.His rebounding is always going to be there. His high low passing with Jeff is a thing of beauty. What will this team be like when all of his bunnies start going in. Also, Baylor got tougher and meaner towards the end of the game. Consider that was when KU pulled ahead permanently. The crowd last night was louder and more excited whenever there was a block than when there was a dunk. Welcome back EJ. Ben. None of us had seen you play until this year. This was way beyond expectations. When you hurt your ankle, Jayhawks throughout the world were stunned and yet happy to see you putting your weight on it as you walked to the training room. Fans also were wondering if the third super recruit would blossom when forced into the lineup. AWIII. My two favorite times of the year are KU basketball during conference play and when tomatoes are in season.

Our FG% has dropped merely because we are being fouled so often now, a chunk of those misses are simply fouls not called. The strategy we've faced since Temple is run the entire shot clock to shorten the game, then shoot a three to beat the buzzer, and defensively, foul any open shooter to make them earn it at the line. Its OK, it failed three times in a row, and we've learned to win ugly games too, a real important lesson for tourney time.

The Baylor Game was much more straight up, just great defense from equally matched athletes that shut down their man to the best of their ability and again, we prevailed. Get well soon to Ben!