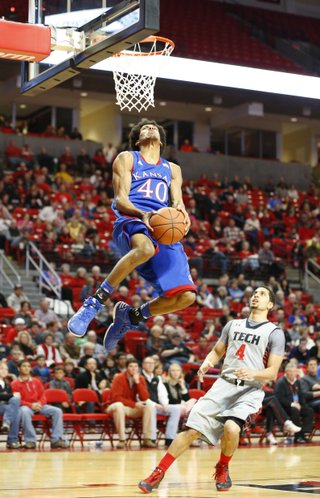 Kansas forward Kevin Young soars in for a reverse jam before Texas Tech guard Ty Nurse during the second half on Saturday, Jan. 12, 2013 at United Spirit Arena in Lubbock, Texas. by Nick Krug

1. Kevin Young: The senior was Kansas' spark plug in the second half, lifting the team's energy with his hustle and also his up-and-under, fast-break dunk with 14:15 left. Young led KU with 14 points on 7-for-9 shooting, adding four rebounds, two steals and no turnovers in 24 minutes. He also showed increased range on his jump shot, as Tech was the second team in a row to sag off him defensively.

2. Travis Releford: After not posting a steal in four straight games, Releford led KU with three steals against Tech. Not only that, he allowed only one three-pointer to Tech's Dusty Hannahs, who entered as the Red Raiders' only real three-point threat. Releford was great in transition, scoring 12 points on 4-for-5 shooting while also making all four of his free throws. He also had three rebounds, an assist and no turnovers.

3. Jeff Withey: The big man rebounded much better in the second half, grabbing five of his seven caroms after the break. His aggressiveness also was rewarded on the offensive end, as he earned 10 free throw attempts (making eight) while attempting just three field goals. Withey's final line was 12 points, seven rebounds and one block with two turnovers in 31 minutes.

4. Ben McLemore: McLemore once again struggled to free himself for shots while also settling for some out-of-rhythm jumpers. He scored well in transition, though, and made it to the line eight times. The freshman posted 10 points on 2-for-7 field-goal shooting (0-for-4 from three) with four rebounds, two assists, two blocks, a steal and turnover.

5. Naadir Tharpe: He made two difficult threes for his only six points, but both were crucial shots that helped KU keep a comfortable lead. In the first half, KU looked better offensively with him at the point, and after playing 19 minutes Saturday, he now has played between 15 and 20 minutes in each of KU's last eight contests. Tharpe finished 2-for-5 from the floor with an assist and a steal to go with two turnovers. He also appeared to work hard this game to pressure his man defensively.

6. Elijah Johnson: Another high turnover game for Johnson, who continued his recent stretch of rough games. With his four-turnover performance Saturday, the senior now has 15 turnovers in his last three games. Johnson played better in the second half, ending with five points on 2-for-6 shooting (1-for-3 from three) with four assists to go with his four giveaways in 35 minutes.

7. Jamari Traylor: The freshman has a knack for getting steals from the forward spot, and that continued Saturday, as he grabbed two steals in his 10 minutes. He missed both of his field goals but added three rebounds without turning it over.

8. Perry Ellis: He has to lead KU in layups that go around the rim before spinning out. Ellis went 0-for-3 from the floor and 1-for-2 from the free throw line to finish with one point. He also had two rebounds and a steal in 13 minutes.

What is up with the offense the past few games? Even though we are winning (this one more convincingly than the last two) we are dropping like a stone in Kenpom's ratings.

This game, Bill Self focused on defense, hence the 25 and 21 points in each half.

Ranked #6 (2 in the RPI), I would anticipate being ranked about #4 next week. All the statistical ratings go up and down, but at the end of the season, the teams at the top are the ones that win and KU will do a lot of that this year.

You might want to check the site again; before Sat's data has been uploaded we've already dropped to 9th from being 5th before the Temple game. A drop that large (especially when we are winning during that period) is pretty significant.

Our numbers to-date predicted a 87-63 win over tech...so although our defense was better than expected we've undershot our adjusted tempo offense by close to 20 points TWICE this week.

KU's offense always feeds off defense and transition opportunities. For at least the first half the feeder was empty.

When we have to play half-court offense every possession, a lot of teams will be able to hang with us.

If Michigan beats OSU tomorrow, then yes, but the game's in Columbus and it's a pretty intense rivalry so you never know. If Michigan loses, they should drop below KU since KU won in Columbus and Michigan will have lost in Columbus. More likely, they drop to 4 and it's UL, IU, Duke, UM, KU.

I might point out that Dusty Hannahs was also guarding Releford. At some point we have to expect more out of Releford offensively. We're struggling on the offensive end and Releford just disappears in the first half. Puzzling.

Not sure anyone really played well except KY.

The lid will soon come off the basket for Perry Ellis. Keep working and going strong!

I agree. He looked more comfortable and under control. I think being more explosive as he finishes will be the difference. His instincts as a rebounder and passer are showing more and more.

I'd like an animated gif of KY's double pump reverse dunk! :-)

In a huge moment, he tranforms into a sophomore in March.