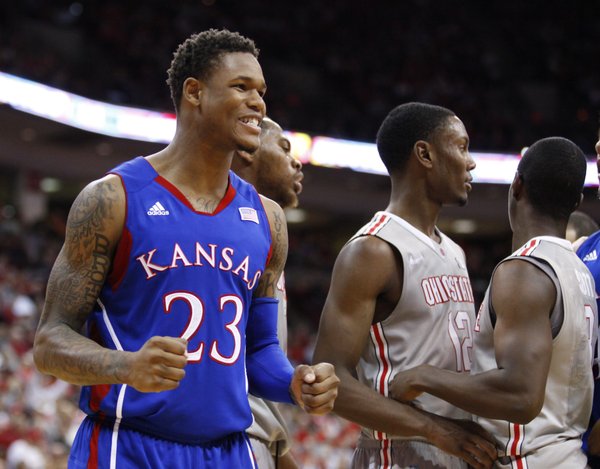 Kansas guard Ben McLemore clenches his fists after a bucket and a foul against Ohio State during the second half on Saturday, Dec. 22, 2012 at Schottenstein Center in Columbus, Ohio. by Nick Krug

1. Ben McLemore: Caught fire early and played with aggressiveness throughout. The freshman posted a game-high 22 points on 8-for-17 shooting, which included 3-for-6 shooting from three. He also had six rebounds, two assists, a block and a steal to go with four turnovers in 36 minutes. His admirers in the Ohio State postgame press conference included guard Aaron Craft and coach Thad Matta.

2. Jeff Withey: Posted a double-double with 14 points and 10 rebounds in 34 minutes. The sign of him being an elite player is that you can immediately tell when he's not in the game. The senior had just one block, but once again, he forced an inside team to play outside-in. Ohio State made just 12 of 34 two-pointers (35 percent), with a few of those makes coming in garbage time.

3. Travis Releford: Did a nice job chasing down Deshaun Thomas defensively, especially in the second half. Thomas finished with 16 points on 4-for-11 shooting (3-for-7 from three), but Releford should be given credit for the fact that Thomas didn't shoot more. The senior guard also was his normal efficient self offensively, posting 11 points on 4-for-5 shooting with a big three in the second half to give KU the momentum for good.

4. Elijah Johnson: Poor first half was followed by a strong second half where KU coach Bill Self said he controlled the game by setting the tempo. The senior finished with 13 points on 4-for-8 shooting (0-for-2 from three) while making it to the free throw line a season-high six times. He also had two assists and four turnovers in 32 minutes.

5. Kevin Young: Provided a big boost late in the first half by getting to the free throw line to break up an Ohio State run. He struggled from the line (4-for-10) but still made his only field goal attempt for six points with 10 rebounds, three assists and three turnovers in 33 minutes.

6. Naadir Tharpe: Provided great minutes in the first half, attacking Ohio State's aggressive defense off the dribble when Johnson wasn't. Tharpe made both of his field goals (including a three) to end with five points, three assists and no turnovers in 15 minutes. The only blemish on his stat line was four fouls.

7. Jamari Traylor: Gave KU some athleticism inside when Withey needed a breather. He notched three points, two rebounds, a block and a turnover in seven minutes.

8. Perry Ellis: Wasn't productive during his two stints in the game. He missed both shots he took, posting no points and three rebounds to go with an assist and a turnover in five minutes. Self still appears to be looking for Ellis' mean streak.

9. Rio Adams: Checked in to save KU's guards from foul trouble, Adams picked up a foul himself, which sent Self's fingers quickly up to massage his temples. Adams had no other statistic in his 0-plus minutes.

Posted this in the post-game remarks as well, but Travis was driving me nuts today. I find it hard to believe he ONLY had 3 turnovers. If he did, I remember all 3. He fumbled a hand-off on the weave at the top of the key, air mailed that wide open lob pass to BMac a good 3 ft. out of his reach, wasn't even moving when he was camped out in the corner with a foot on the line. It also seemed like he had numerous other times where his ball handling was shaky and he was fumbling the ball around. Perhaps I'm just so used to his defense that I take it for granted, and his 3 was HUGE. Still, I woulda moved him down a couple spots on this list.

Also agree with HEM's sentiments on the other thread about Tharpe being a key factor today. Maybe not the MVP of the game (as he suggested), but he's gotta be higher than 6th.

number 3-6 were all very close, each with highs and lows, but I agree that Tharpe really proved himself today. He attacked very well offensively and stayed in control. Looked like Steve Nash on the drive and kick out to BMac He initiated the fast break very well. But most importantly when he guarded Shannon Scott and Aaron Craft he kept them both in front of him.

You're definitely taking his defense for granted, as well as the scoring efficiency. He was aggressive a few times and made good on it. I'd consider him for the top spot only 'cause I'm taking BMac's offense for granted waiting for the game where he starts hitting those shots off the drive. I was also happy with TRele's rebounding for the first time this year.

On an unrelated note, Withey actually blocked about 6 shots today, but the refs kept covering them up with bogus calls.

Thank you for the aprox. Blhawk count. I can't record games, knew that Jeff had stops that were, well, blocked by the refs. We'll see more of this as the year continues. Also wonder if players are going to told to flop into Jeff in an attempt to draw a foul, instead of leaning away and trying to shot over him.

Gonna have to start a blocked blhawk stat. I'm looking forward to Jeff breaking the block record in what in turning out to be one of the most surprising and unexpected successful careers in Hawk history.

Well, I didn't expect it. This is so much fun.

Some concerns I still have about this team: free throw shooting, pick and roll defense with Withey, 3 point defense, and our bench outside of Tharpe. We won't make another Final 4 with only 3 good free throw shooters and Ellis struggling badly every time he plays. Defensively, we gave up a ton of open 3's that any other top 10 team, especially Duke, Michigan, or Indiana would've exploited. On the bright side, it was great to see this team fight through adversity on the road against a good team and come out with a win. Nadir Tharpe was spectacular offensively. This might be Self's best 3 point shooting team he's ever had at KU, even when Andrew White doesn't play, because of Ben McLemore and a much improved Travis Releford.

I agree the free throw shooting was terrible today, mostly KY going 4-10, but on the season we are shooting .753 and you cant ask for much better than that as a team. Its better than the last few years if I recall.

Still plenty of time to tweak things during the conference season.

Free throw shooting was good except KY, and he spent a lot of time at the line practicing before the game. Relative to past KU FT shooting, I can't complain.

Thought Tharpe was very good today. He was very smooth in running the offense I thought. Heck, everybody was good though, great win!

I could have sworn Withey had 3 or 4 blocks. Time to get a new Rx for my glasses.

Most were negated by fouls on other KU players

That one block, at the rim...that was awesome!

The one the refs thought was a foul? Bad call.

Surprising AW3 did not play until you remember Self had that the 3 guarding Deshaun Thomas. Putting AW3 on Deshaun in a close game away from home would have been risky.

Yah, I was wondering the samething myself. But the hot shooting wing hasnt quite proven himself on high level Defense yet, I spose.

I'm sure Self would have been tempted to get him in if he hadn't needed either a big body to fill in for Withey or a ball-handler on the court whenever he was looking to the bench. HCBS could have gone small since he had Releford on DT, but I think Young and Tharpe just playing well and OSU's defensive intensity kept Self from wanting to go to AW3.

So glad these guys made me eat crow today. My concerns on the defensive glass looked valid in the first half, but KU really controlled it in the 2nd half. I just don't see any reason to not be ecstatic with everybody's play today (except Ellis) and as a team this group just looks phenomenal. MSU seems to have a similar thing going this year without Draymond where they are passing the ball a lot better. Without TT and TRob KU lacks some of that offensive firepower, but the team is really coming together and everyone is staying in attack mode.

I still think Self needs to get after Perry Ellis to only attempt dunks for a game and to dominate the glass while he's in. I'm dying to see the guy get an over the back call going up for a put back dunk! I'm not saying Ellis has disappointed me, just compared to the way Tharpe grew up today, the way BMac showed up in a true road game, the way W has improved offensively the way Travis has been more aggressive, the team as a whole has surprised to the upside, Ellis hasn't done that yet. 3 boards and an assist in 5 mins is solid, but I know he's capable of much more.

Ellis' game is a big disappointment. He seems frail.

Not frail, just hasn't played against tough competition long enough to realize how hard he has to go to get it done at this level. It'd also be easier on him if more of his minutes were alongside Withey. Seems like he's spent a good amount of time out there with either Traylor or Young. I'm in no way disappointed with the player Perry Ellis is, just anxious for him to improve. It's still very early, and he doesn't need to be a star by the end of the year or anything. He seems to have a great attitude, so it's going to be fun when it starts clicking for him.

Well, it would help if Ellis stopped the spin-move bit. Instead of spinning away from defensive pressure, he turns right into it (and gets his weak shot rejected). His problems are correctible; he just needs to play - and stop making the same mistakes over and over.

I Agree with these. I don't remember any "garbage time" baskets though. I was sweating bullets til under 20 seconds.

Kevin Young, 4-10 from the free throw line? I so vividly remember a natiional champltionship game where Collison was 3-10 - cost us a championship. Better clean that up before the games really count.

Lot of things cost KU that championship, mostly the fouls on Langford, then GMac's shooting, then FT shooting. The fact that Young drew that many foul shots was a huge bonus in my book. He handled himself well underneath, avoided charges, made things difficult on the defense. Seems like KU rebounded a missed FT of his and picked up an easy 2 anyway. Basically what I'm getting at though is he played against a team with good size and didn't miss shots or get swatted, he drew fouls, so that's key.