Along with Kansas, Maryland, UCLA and Kentucky are considered to be the favorites for Thor. Clemson, Arizona, Miami and others extended offered to Thor in late May and June. The Jayhawks offered Thor back in early December. 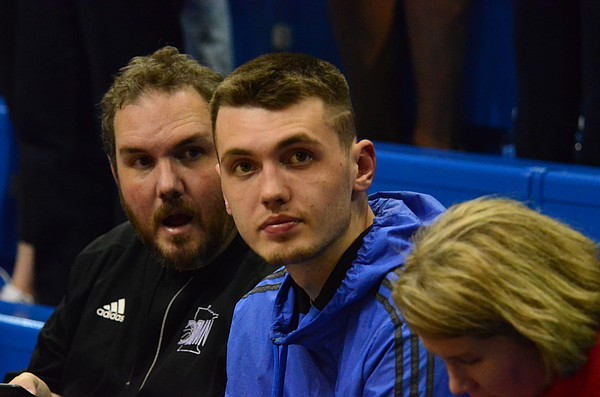 Another visitor this week for Kansas

2020 PF Isaiah Cottrell will arrive on Thursday for his official visit to Kansas. The 6'10" junior from Bishop Gorman High School in Las Vegas, NV, will begin his 48 hour official visit on Thursday before heading back home after Saturday's game vs Baylor.

Future Jayhawk Christian Braun is on his way to state once again. The 2019 G from Blue Valley Northwest led his teammates to two easy sub-state victories last week. The Huskies will now head to Wichita to defend their State Title against Olathe North in Wednesday's opening round.

Braun's senior season has done nothing but make him more of a favorite to win the DiRenna Award, which is given to the top player in Kansas City. Current Jayhawk Ochai Agbaji won the DiRenna in 2018.

Check out highlights of Braun from various games throughout his senior season. 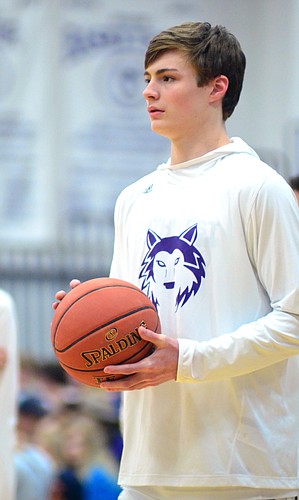 Kansas saw a number of recruits on Thursday

Achiuwa, who has scheduled his official visit to Kansas to begin this Sunday, is also scheduled to officially visit North Carolina on March 9th. Achiuwa and fellow Kansas target Matthew Hurt are two of the five players participating in the McDonald's All American game that remain uncommitted. Achiuwa will like make his college decision sometime in April.

Beverly is a 6'3" guard that has seen his recruitment take off over the recent months. The Michigan native is being recruited by Michigan State, Indiana, Iowa State, Baylor and Kansas among others.

Kansas Assistant Coach Jerrance Howard has been recruiting Texas native Cade Cunningham for some time. Kansas, LSU, Oklahoma State and Kentucky are some of the schools recruiting Cunningham.

Arkansas native Moses Moody is being recruited by Arkansas, Auburn, Missouri, Stanford, Florida and Kansas among others.

Kansas Head Coach Bill Self traveled to Utah on Wednesday to see 2019 SF Tristan Enaruna in action as his Wasatch Academy squad takes on Kearns.

Coach Self and Kansas Assistant Coach Norm Roberts watched Enaruna in Florida last month, and with his season winding down Coach Self is taking advantage of the week off between games for the Jayhawks to once again watch the 6'10" skilled forward in action.

Enaruna is expected to plan his official visits in the very near future, but he has unofficially visited Creighton. He also was recently offered by Miami, and has picked up interest from Duke, Texas and Kentucky in recent weeks.

Kansas Head Coach Bill Self and Assistant Coach Norm Roberts will see two of KU's top 2019 recruits on Thursday in Florida at the Montverde Academy Invitational in Montverde, FL.

Coach Self & Coach Roberts will watch 2019 SF Precious Achiuwa of Montverde Academy and 2019 SF Tristan Enaruna Wasatch Academy in Utah. Both Montverde and Wasatch kick off play in the Montverde Academy Invitational tonight, and the two teams will face off against each other on Saturday.

Achiuwa has yet to schedule any official visits, but he did unofficially visited Connecticut, Memphis, Western Kentucky and St. John's. UCONN, North Carolina, St. John's and Kansas are considered the schools out front for Achiuwa. As for what schools he will eventually officially visit, that will likely be determined over the coming weeks as his high school season comes to a close.

Enaruna has become a top recruit after bursting onto the scene over the past few months. Kansas Assistant Norm Roberts has traveled out to Utah to see the versatile SF originally from the Netherlands. Enaruna will also look to set up visits in the near future. He is considering Illinois, Creighton, Georgia Tech and Kansas among others. Since arriving in the United States towards the halfway point of his junior year, Enaruna has done nothing but improve his game and impress college coaches who see a player with tremendous versatility and terrific skill set.

Stanley closing in on announcement

2019 G Cassius Stanley less than three months away from announcing where he will attend college. The 6'5" athletic specimen from California will make his announcement on April 17th, which is the first day of the late signing period.

Stanley had some interesting comments about Kansas when he recently spoke with 247Sports writer, Evan Daniels.

"They want me to come in right after Quentin Grimes, come in that two-guard spot and pretty much play the one and two and just come in and do what I have to do," Stanley told Daniels.

Even though Stanley has long been considered to be one of the top players in his class, it's not a stretch to say that also might be one of the most improved players in the class. He has always had the ability to finish in spectacular fashion at the rim, but over the last few years Stanley has really shown the ability to hit from beyond the three point line and he has improved his mid-range game. These improvements in his game have made him one of the more well rounded players in the 2019 class.