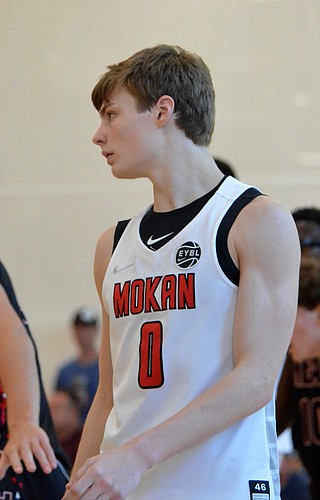 Class of 2019 Kansas commit Christian Braun made the long trip west from Overland Park to Lawrence on Friday night for Late Night in the Phog. It was Braun's first time inside a packed Allen Fieldhouse since committing to the Jayhawks earlier this month. And it was an experience he won't soon forget.

"It was good seeing all of the guys [KU players], and the coaches. I got to catch-up with Jeremiah (Robinson-Earl), (N'faly) Dante and got to meet Cassius (Stanley) and James (Wiseman)," Braun told KUsports.com.

Braun and Robinson-Earl know each other well, and have had some battles on the court over the past few years when Blue Valley Northwest and Bishop Miege played each other. Braun and Dante were both key in leading their AAU team, MOKAN Elite, to the Peach Jam Final Four this past summer.

Braun didn't know too much about 2 Chainz before his performance at Late Night, but he came away a fan of him.

"I didn't think I would like him as much as I did," said Braun about 2 Chainz.

Braun was blown away by the atmosphere inside Allen Fieldhouse and knows that he will have the chance to play in front of a packed house each and every game when he arrives in Lawrence next year.

"I got to experience the best fans in the country so it was a lot of fun," said Braun about the 16,300 fans inside Allen Fieldhouse.

I have to think Braun is just a really sharp and humble kid. To understand KU fans, their loyalty, and the love and support he will have the rest of his life by coming to KU. I can hardly wait to see him in uniform. RCJHKU!