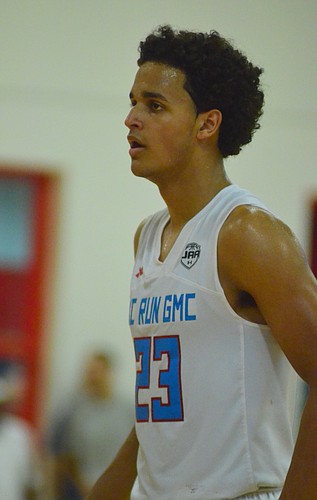 Class of 2019 forward Jeremiah Robinson-Earl has trimmed his list to five schools, according to multiple reports.

Robinson-Earl, who recently made the move to IMG Academy in Bradenton, Fla., is now down to North Carolina, Arizona, Notre Dame, Villanova and Kansas.

Robinson-Earl spent his first three years of high school at Bishop Miege in Mission. He has long been a top target for the Kansas coaching staff.

Self was the only head coach of the five remaining schools to be on hand for every game on both days. Kansas assistant Norm Roberts was courtside for much of the weekend, as well.

In case it’s not obvious what that means, this might be a good time to remind you that Robinson-Earl is firmly planted at the top of KU’s wish list in the 2019 class. Not only is he one of KU’s top targets in the class — Minneapolis PF Matthew Hurt is right up there with him — but Robinson-Earl is one of the top-ranked players in the class, as well.

A five-star prospect, Robinson-Earl has been praised for his all-around game, power inside and ability to do pretty much anything a coach could want on the basketball floor.

Some have speculated that Robinson-Earl’s recruitment will come down to a two-horse race between Kansas and North Carolina, where Roy Williams, who coached Robinson-Earl’s dad, Lester Earl, at Kansas, is still the head coach.

Robinson-Earl hopes to have all of his official visits done in the fall, and according to Katie Robinson, the dates and details are being worked on now.

the KC area, especially on the KS side, dont produce too much high level ranked talent..so when it does, KU needs to keep them here