1. James Sims: Even when it was clear the ball was going to him, Sims was able to ram his way to tough gains on his way to first downs. He rushed for 129 yards and two touchdowns and had 107 rushing yards in the first half.

2. Josh Ford: As Denver Broncos D-back Chris Harris tweeted, Ford is “a beast on special teams.” He blocked a punt, setting up a six-yard touchdown run for James Sims.

3. JaCorey Shepherd: He continues to make quarterbacks pay for trying to pick on him. He intercepted a pass, recovered a fumble and had four tackles.

4. Keon Stowers: Brought non-stop energy up front and was a disruptive force. One of his four tackles was for a loss and he forced a fumble. Strong guy in more ways than one.

5. Darrian Miller: Quick, balanced back scooted his way to 67 rushing yards on nine carries and broke one run for 38 yards.

6. Victor Simmons: Two of his eight tackles were for a loss. Knows how to use blend of size and speed to make plays.

7. Isaiah Johnson: Getting more physical by the week, the sophomore safety was in on a sack and had another tackle behind the line of scrimmage.

8. Jake Love: Performed well in filling in for injured Ben Heeney. One of his eight tackles was for a loss and he was credited with a pair of quarterback hurries.

10. Courtney Arnick: Has a nose for the ball and can move. Had six tackles and made some of them hurt. 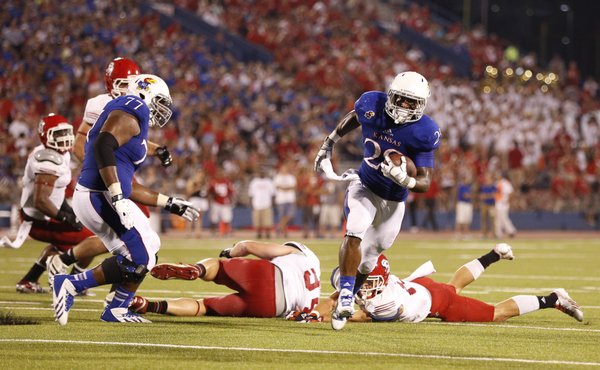 Kansas running back James Sims heads in for a touchdown against South Dakota during the third quarter on Saturday, Sept. 7, 2013 at Memorial Stadium. by Nick Krug

1. James Sims: Despite fumble for which Sims apologized to coach Charlie Weis after the game and dropping a pass, Sims again looked like KU’s best player, rushing for 94 yards and two touchdowns on 16 carries. As advertised, he looked faster.

2. Darrian Miller: Wearing twice the number he wore two years ago when he last was in the program — he switched from No. 3 to No. 6 because Tony Pierson now has No. 3 — Miller reminded everyone of just what a terrific runner he is. He gained 72 yards on 14 carries.

3. Keon Stowers: Made a phenomenal return to the end zone on an interception — the first pick of his life at any level, Stowers said afterward — only to have the return called back because of a penalty. The interception counted, though, and so did the four tackles, two of the solo variety.

4. Tony Pierson: Showed he is up to the task in new hybrid receiver/running back role. Gained 47 yards on the ground and 32 yards in receptions. Occupies a great deal of the defense’s attention because he’s such a big-play threat.

5. Josh Ford: Blocked a punt and set up KU’s first touchdown with a 22-yard reception that at first was ruled a TD. His speed and enthusiasm are a terrific blend.

6. Matthew Wyman: Had attempted just one field goal in his life before Saturday, a blocked 50-yard attempt in high school. Then again, he had only played four football games, heading into Saturday and spent most of his athletic career kicking a soccer ball. He calmed his nerves well enough to drill a 45-yard field goal, giving him instant folk-hero status with the KU student section.

7. Ben Heeney: Leg cramps forced him out of the lineup repeatedly, but he still made his presence felt.

8. Brandon Bourbon: Rushed the ball twice, once gaining 24 yards and other time scoring a TD on an eight-yard run. Also caught a pass for five yards. He looks more confident than in years past and could have a big year.

9. Connor Embree: Walk-on-turned-scholarship player had 92 yards on four punt returns, including one that went for 42 yards.

10. Dexter McDonald: Consistently covered his man tightly and had two pass break-ups in a strong return to the KU program after a year at Butler County Community College.