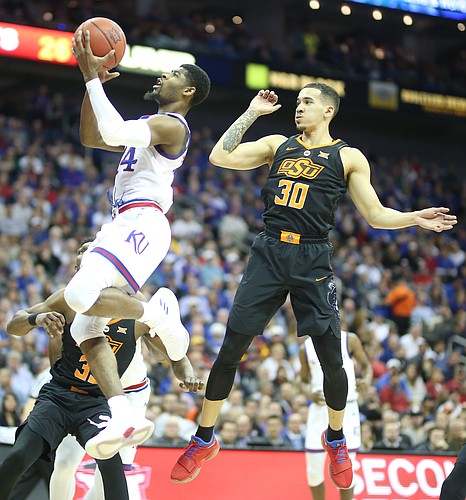 Kansas guard Malik Newman (14) gets to the bucket past Oklahoma State guard Jeffrey Carroll (30) during the first half, Thursday, March 8, 2018 at Sprint Center in Kansas City, Mo. by Nick Krug

4 - Mitch Lightfoot: Fouled out in 23 minutes and many of them were not good fouls. Two came on illegal screens, one when he grabbed a player at the high post, another on a 3-point shooter. Battled hard inside, though, ran the floor hard and finished with eight points and six rebounds.

6 - Lagerald Vick: During a strong second half, he picked up all 11 of his points, both steals and 4 of 5 rebounds. No surprise then that with the X factor engaged the team played much better in the second half.

7 - Marcus Garrett: Contributed four points and sound defense to the cause in 17 minutes on the floor.

Play like a team, play hard, play smart, play defense, and you can beat any team that doesn't.

Come on Tom, how bout a little ‘sumpin sumpin’ for Sosinski - a #8 ranking for tallying up a foul? He had secret agent status - 001!!