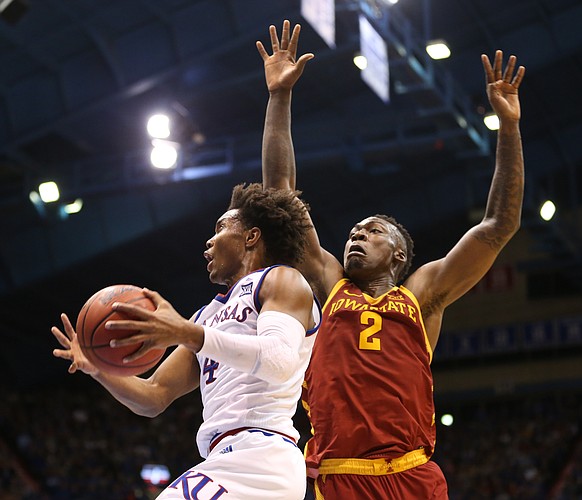 Kansas guard Devonte' Graham (4) gets to the bucket past Iowa State forward Cameron Lard (2) during the second half, Tuesday, Jan. 9, 2018 at Allen Fieldhouse. by Nick Krug

1 - Devonte’ Graham: His shots were hitting the front of the rim, which can be a symptom of fatigue, but he still brought great energy at both ends, did a terrific job of feeding the hot hand in each half and had four steals. Sat for 49 seconds in the second half and KU's lead went from seven points to one. Made just 1 of 11 shots until making three in a row at the end of the game, a 3-pointer, wild reverse layup and a mid-range, pull-up jumper. Graham played even better than his totals of 11 points, nine assists and four steals.

2 - Malik Newman: Iowa State guarded him with a big man and dared him to shoot from the outside. He took the dare and in the second half caught fire, scoring 19 of his season-high 27 points in the second half. Also contributed eight rebounds, two assists, two blocked shots and a steal in 34 minutes off the bench. Started the second half and nobody should be surprised if he starts Saturday against Kansas State.

4 - Udoka Azubuike: Punished the rim with four dunks and continued to beat the iron by making just 1 of 4 free throws. Made his presence felt defensively with four blocked shots in 29 minutes. Needed to use size advantage to get more than six rebounds.

5 - Lagerald Vick: Failed to reach double figures in scoring for the third game in a row, but did other things well. Had a huge put-back late in the game, one of his team-high eight rebounds, three off the offensive glass. Had four assists, three turnovers and two steals to go with eight points.

7 - Mitch Lightfoot:Played 11 scoreless minutes with one rebound and one blocked shot.

8 - Sam Cunliffe: In his two scoreless minutes, he missed a shot, committed two personal fouls and one turnover and Kansas was outscored by seven points.

Will we ever see Vick play defense?

Any word on Udoka's back? He didn't seem to be in much pain during the game, but that HAS to be part of the reason his rebounding numbers have been so anemic. Right?

Vick is probably the #2 defender behind Graham.