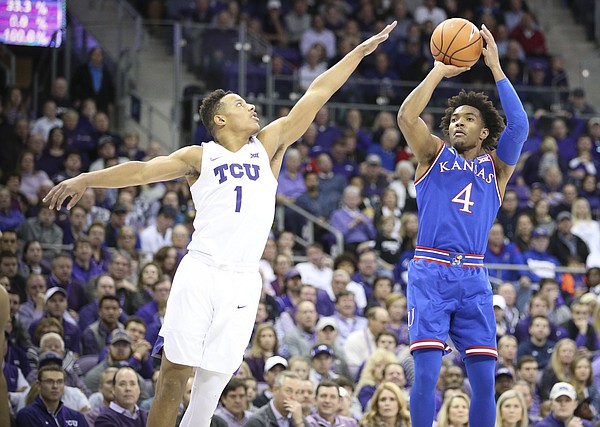 Kansas guard Devonte' Graham (4) pulls up for a three against TCU guard Desmond Bane (1) during the first half, Saturday, Jan. 6, 2018 at Schollmaier Arena. by Nick Krug

1 - Devonte' Graham: Never looks tired, despite consistently logging huge minutes and playing at such a fast pace. Made sure Kansas never lapsed into passive mode and won the game at the free-throw line, where he made 13 of 15 shots, and beyond the 3-point arc, where made 3 of 6. Totaled 28 points, six assists, three rebounds and three steals and turned it over three times.

2 - Svi Mykhailiuk: Played aggressively, shot and passed well and finished with 20 points, four rebounds and six assists and turned it over just once. Made 5 of 7 3-pointers and played well in both halves.

3 - Mitch Lightfoot: Had a huge block of a Jaylen Fisher 3-point attempt with 32 seconds left, his sixth block of the night to go with nine points and seven rebounds. Made 1 of 2 3-pointers and made his career-high 26 minutes count.

4 - Udoka Azubuike: Had more points (14) than minutes played (13). TCU was happy to see him foul out because the Horned Frogs didn't have anyone who could keep him from scoring.

6 - Lagerald Vick: Played better than he did against Texas Tech, but not up to the standards he set with strong early season play. It was neither his most tidy nor most aggressive performance. He did make 3 of 4 field goals and both 3-point attempts, but also had three turnovers and just three rebounds on a night he didn't have a single assist. Limited by foul trouble to 26 minutes.

8 - Malik Newman: Scored in double figures in each of his first six games and only 3 of 9 since. Was not playing well in the starting lineup and has been less effective since coming off the bench. Played 15 minutes, scored one point and didn't contribute a rebound or an assist and had one turnover and four personal fouls. 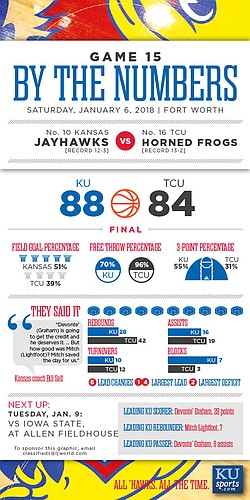 I’d give Mitch “Jimmy Chitwood” Lightfoot top performer status in this one.

Way to step up and play with grit young man !

I'm with you, Doug. But the broadcasters went a little overboard with the shock, especially the comment about him hardly ever playing. They acted like he was some 1-minute-a-game walk-on who had appeared out of nowhere.

(And did anyone else hear the classic comment about both teams shooting extraordinarily well from the FT line when KU was 10-for-19???)

Question for Tom. Assuming we do get one or both big guys on the

Sorry. Bouncing fingers. If we get DeSousa and/or Preston on the court, what does Tom think happens to Newman? The coming off the bench experiment’s been a big bust. Does he take an permanent seat?

Seems logical to me. Has Newman contributed anything the entire year?

Malik sure didn't contribute much in this game though he has in the past. It sure seems like it's been downhill all year though.

That being said Coach is completely aware of his potential and plays players accordingly in many situations - much to the disdain of the local non-HOF coaches.

My guess is he'll continue to get minutes though he'll be farther down the line.