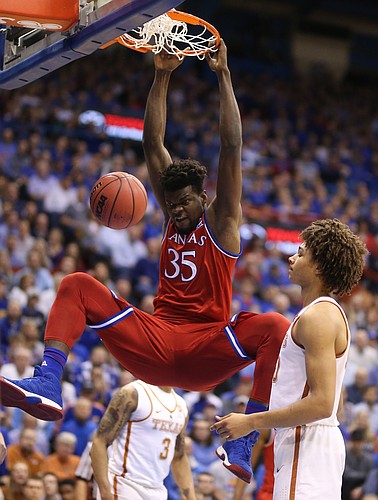 Kansas center Udoka Azubuike (35) hammers in a dunk before Texas forward Jericho Sims (20) during the first half on Monday, Feb. 26, 2018 at Allen Fieldhouse. by Nick Krug

1 - Udoka Azubuike: Mo Bamba was a scratch because of a sprained toe, which created the opportunity for Azubuike to dominate the paint. He did, producing 20 points, eight rebounds and five blocked shots, numbers that could have been better but for a rough night at the free-throw line (0 for 4) and a questionable traveling call that nullified a dunk. As it was, the sophomore center from Nigeria punished the rim with six dunks and made 10 of 11 shots from the field.

3 - Marcus Garrett: He has a nose for the ball and he used it to pick up three steals and four rebounds. Also had 11 points, three assists and a blocked shot and turned it over just once. Made 2 of 4 3-point shots and had a terrific night in every phase of the game.

4 - Svi Mykhailiuk: Finished a couple of drives early in the game with nifty scoop shots, one with each hand. Had the hot hand, making 7 of 11 from the field and 3 of 5 from beyond the arc. Produced 17 points, three rebounds and two assists in 35 minutes.

5 - Malik Newman: Not his best night and not his worst. Made 4 of 9 shots and 1 of 4 3-pointers on a night he totaled nine points and four rebounds.

6 - Lagerald Vick: Made a couple of strange passes on what wasn’t a great night for him, but he did snare six rebounds and had four assists and four points in 28 minutes.

Shouldn't Clay Young be on here, if even in spot #10? Give the fella a break!

Amen Tim. Clay has played way more productive minutes than Sam Cunliffe. There should be some room to insert Clay at #8, then #'s 9 and 10. I demand a re-count.

For whatever reason, walk-ons have never been part of these ratings. It's no knock on Clay, it's just how Keegan has always done it.

Is it just me or is Marcus Garrett starting to look like Tyshawn Taylor when he gets the ball in his hands. Opposing defenders have been unable to keep him in front of them and he seems to have a knack for getting to the rim.

He's obviously special to watch on the defensive end. He causes so much trouble for opposing guards, but lately he's been looking pretty incredible at getting into the paint and finishing at the rim.

I honestly never even considered that comparison but it makes sense to me now that you mention it. Both struggled to shoot their freshman year, but even with defenders giving them space on the perimeter, both were able to get into the lane.

He's already a good defender and if he can improve half as much as Tyshawn did then he could have a special career.

Marcus Garrett is maybe the most underrated player in the conference.

He's an average jump shot away from becoming the best all-around player in the Big 12.

Although he is 5 - 9 from deep in the last several games. People will probably continue to use that line about him until at least next season, which could work to our advantage in March if teams are lazy about their scouting report and just look at season averages.

It's a tough game to rank the players. Hard to not rank Udoka #1 especially because of how good the team was with him on the floor and how much they struggled when he sat.

2 could really go to either Graham or Svi in my opinion. Garrett played a great game, one of his best for sure, but I think he comes in at #4.

Hard to understand why this game wasn't a blowout. I give lots of credit to that Young kid from UT as well as Sims and Roach who was really good in the first half.

There were a lot of really crisp, exceptional plays, but then there were also a lot of really boneheaded plays. 4 pt swing at the end of the half, Vick's 2 "passes", and others. There are easily 10+ points that could have been that difference.

KU still gives opponents more than their share of offensive rebounds and 50/50 balls. UT scored a lot off of loose stuff.

Those who believe Danny Manning was solely responsible for developing the string of great big men (during his era of coaching) simply need to look at Udoka. Self and his (other) assistants deserve far more credit than they have received.

underrates SVI a lot. Frankly, I don't believe we win the 14th if Devonte and SVI don't come back. I look at everything a player does in the box score, and since the conference started SVI has done a lot more than just shoot 3s.

I still think this team can raise it's game one more level. But it requires Vick to do more of what he did in the Texas game, rebound, play defense, get assists. The scoring game will come around, just like it did for Newman. We get all 5 playing well, and look out.

Svi has really grown up this year in particular. He's become so much more aggressive, assertive, and just strong with the ball.

Vick also needs to to a little bit less of what he did in the UT game - 2 passes to nowhere.