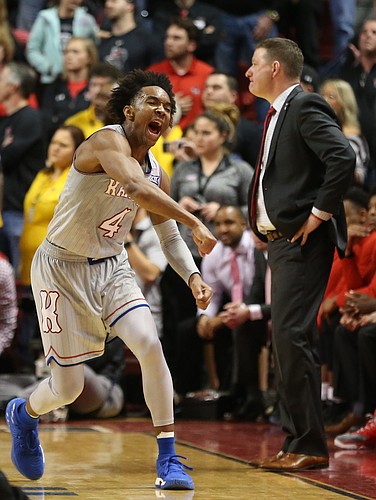 Kansas guard Devonte' Graham (4) pumps his fist after the Jayhawks locked up the win against Texas Tech on Saturday, Feb. 24, 2018 at United Supermarkets Arena. by Nick Krug

1 - Devonte’ Graham: Scored a game-high 26 points in his usual 40 minutes and completely took over the game late, turning back challenge after challenge with spectacular plays. Scored 18 of KU’s final 29 points in the last 13:59. Also had four assists, one on a spectacular bounce-pass to Malik Newman in the left corner for a 3-pointer. Showed that without a doubt he deserves to be named Big 12 Player of the Year.

3 - Uodoka Azubuike: Did a nice job of protecting the rim. Was credited with three blocked shots, but actually had four, two coming within seconds of each other. Norense Odiase did a nice job of keeping him from getting position down low and Azubuike did the same to Odiase at the other end. Azubuike totaled six points and seven rebounds in 29 minutes.

5 - Mitch Lightfoot: Had trouble keeping Tech off offensive boards, as did teammates, but did produce four points, three rebounds, an assist and a blocked shot in 10 minutes.

6 - Marcus Garrett: Was able to get free in the lane and took it in for uncontested dunk. Made 1 of 2 free throws and had two assists and one rebound in 15 minutes.

7 - Lagerald Vick: Not his day. Made 1 of 5 shots from the field and missed all three 3-point attempts. Picked up just one rebound in 39 minutes. Didn’t have an assist, but had two steals and just one turnover. Statisticians gave him credit for one of Azubuike's blocked shots.

Congrats to this team for securing #14 !!