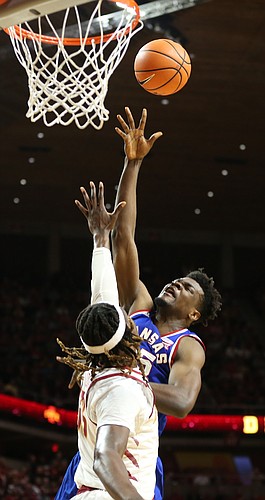 1 - Udoka Azubuike: Picked up third foul 21 seconds into second half but coach Bill Self left him on the court and the center rewarded the coach for that decision. He did a terrific job of establishing position down low and teammates did a great job of looking for him. Scored 12 of his team-high 19 points in the second half and all of his rebounds (three) and blocked shots (three) in the second half. Made 9 of 10 shots from the field, hitting hook shots and an up-and-under to go with the lobs he threw down late in the game. Also made a nifty pass to Devonte' Graham cutting toward the hoop.

2 - Malik Newman: Played with the sort of fire in his eyes that sometimes seems lacking and used it to fuel him to 17 points, six rebounds and four assists.

3 - Lagerald Vick: Left unguarded on the perimeter at times the way Newman was in the first game vs. the Cyclones, Vick made them pay with a big second half, scoring 13 of 16 points. He made a trio of wide-open 3-pointers early in the second half to extend KU’s lead. Made some disruptive defensive plays and had four rebounds and two assists with just one turnover.

4 - Devonte’ Graham: Contributed 13 points, six rebounds and five assists without turning it over, but continued to miss an excessive number of layups. Made 3 f 16 shots from the field and 1 of 7 from 3-point range. Made Made his first five free throws but then missed 3 of 4 down the stretch.

5 - Svi Mykhailiuk: Made 2 of 6 3-pointers and finished with 10 points, just one rebound, two assists and two turnovers.

7 - Marcus Garrett: Played well defensively in 19 minutes and totaled three points, one assists, one rebound, one steal and one turnover.

8 - Silvio De Sousa: Played final 2:44 of first half, scored three points, two coming after he got away with a travel and scored on a put-back. Had three rebounds and gave up one bucket down low. Held his own during stretch that ensured neither Azubuike nor Lightfoot would head into second half with three fouls.

9 - Sam Cunliffe: Played final 1:12 of first half to prevent Newman from risking a third foul. 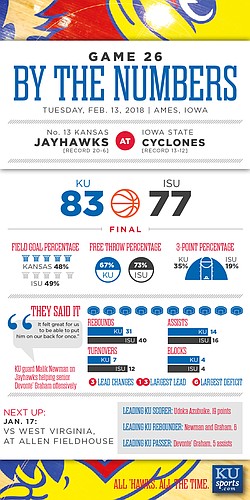 I will definitely take three and three from Silvio!

Again we saw Marcus be active and disruptive.

We forgot about Vick or wanted to during his funk but last night he hit shots and showed that quick leaping ability and movement we have sorely missed.

I really hope Malik stays for another year. He has finally turned into the scorer we hoped he would.

Silvio was good and clutch.

Sam, I am really still here, was set for a put back on Silvio's miss, Must have had some good practices.

Maybe Self has figured something out.

ISU had beat some of the top conference teams at Hilton recently but we looked like the better team which has been iffy in many games this year.

Self realized Udoka was gonna make his silly fouls and took a chance that paid off.

DeVonte is tired. I hope we appreciate his iron man effort.

We missed to many FT's at the end and it gave them a chance.