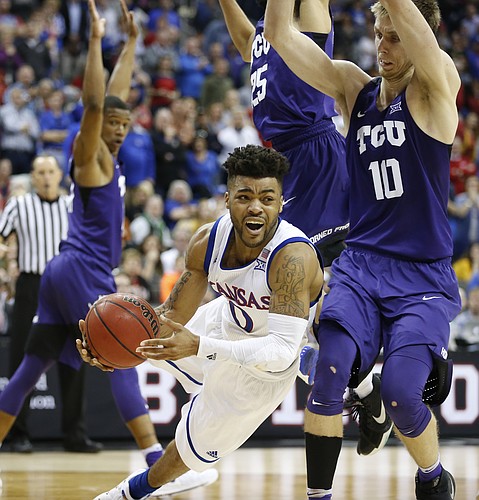 Kansas guard Frank Mason III (0) is fouled with seconds to go during the second half, Thursday, March 9, 2017 at Sprint Center. At right is TCU forward Vladimir Brodziansky (10). by Nick Krug

1 - Frank Mason: Played 40 minutes, totaled 29 points and six assists and made 12 of 13 free throws, showing why he won the Big 12 Player of the Year trophy that was presented to him by commissioner Bob Bowlsby on the court before the game.

2 - Landen Lucas: Had 13 points and 14 rebounds and missed just two shots from the field, one a late left-handed hook that rimmed out. Missed Jackson’s help on defense and on the boards.

5 - Lagerald Vick: Had nine points and six rebounds. Might have scored 11 had he made an attempt at a possibly-too-high lob sent his way by Mason late in the game.

6 - Carlton Bragg: Big blocked shot late but a disappointing performance overall. He totaled one point and three rebounds in 12 minutes and missed all three field-goal attempts and committed two turnovers.

8 - Mitch Lightfoot: One minute, one turnover.

I am amused by the stat for how much TCU outscored Svi. I'd have rather it be the other way around, of course, but still, it was well put.

Can not believe Vick could not make that lob play. That was a beautiful pass by Mason. Vick completely misjudged the ball and his jump.

Bragg has to go. A complete disaster all season and you cant rely on him. The team has to be frustrated by his drama and inability to get prepared for a game. Vick at least brings an attitude of winning with him he just needs to mature