Frank Mason tops ratings in Stillwater with near triple-double 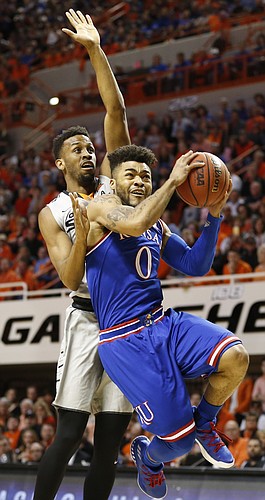 1 - Frank Mason: If justice is served, he locked up national player-of-the-year honors with another extraordinary performance. Nearly had his first triple-double with 27 points, eight rebounds and nine assists. He’s so hard to stop from getting to the hoop, especially in transition, where he had a couple of solo breaks for buckets. Amazing game, amazing season, amazing competitor.

2 - Josh Jackson: Has steadily improved his game in every area. His late 3-pointer was biggest shot of the game and even though his dunks might be what make it to the highlights, passing was by far what he did best. His height helps his vision and gives him the confidence to make tough over-the-top passes with great accuracy. His 17 points, nine rebounds and five assists didn’t begin to tell the story of the extent that he influenced the outcome.

4 - Landen Lucas: Did a nice job of posting up and scoring in the second half and finished with 10 points, seven rebounds.

5 - Carlton Bragg: Scored 9 of 11 points in the first half, made 5 of 6 shots, including a pair of pick-and-pop jumpers and had two offensive rebounds and blocked shot. Played with so much more confidence than he has for most of the season.

6 - Lagerald Vick: Coach Bill Self said he forgot to go where he was supposed to on KU’s final bucket against full-court pressure and it turned out well. He was on the receiving end of Josh Jackson’s long pass and took to the bucket for the game-sealing points. Had three turnovers, a couple of them rough ones, but had several big plays and finished with nine points, eight rebounds, two steals and a block shot.

7 - Svi Mykhailiuk: Made a 3-pointer from the left corner to put Kansas up 6-2 at the 18:25 mark of the first half, but that didn’t shake him from his slump. He didn’t score again, picked up one rebound, one turnover and four personal fouls in 12 minutes.. 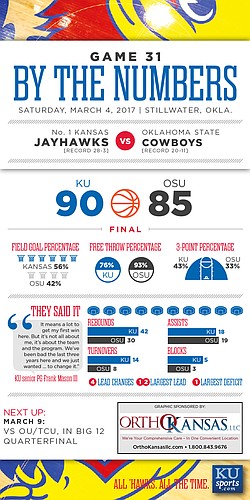 Can one of you post the box score in an article?

Love the Baseline View! Fans chanting "We're going to beat the h..." The Kansas players in the dark, waiting while OSU goes nuts. Then the fun begins...

Wish there was a consistent place to find the Baseline View. I look for it after every game.