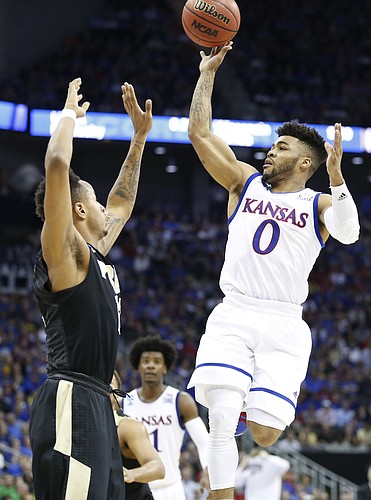 1 - Frank Mason: Floaters, a baseline jumper, hard drives to the hoop, 4 of 5 3-pointers and 4 of 5 free throws on his way to 26 points. He still had enough energy to mix in seven rebounds and seven assists.

2 - Devonte’ Graham: Wow! He’s as hot from the outside as anybody in the country and made 5 of 9 3-pointers, giving him 13 of 22 for the tournament. He scored 26 points, drove so aggressively to the hoop that he was able to make 7 of 9 free throws, and even with such an aggressive night he turned it over just once. had two assists and a steal.

3 - Josh Jackson: Such an active, versatile defender, Jackson knew that this night, more than ever, he would be needed on the boards at both ends and he responded with 15 points, 12 rebounds and four steals.

4 - Lagerald Vick: Stepped into the passing lane and executed a 360-degree dunk, a gutsy move that inspired the team to even greater heights. Good thing for him that he made it.

6 - Svi Mykhailiuk: Hit a couple of big 3-pointers in the first half and finished with 10 points and three boards. Did not turn it over in 19 minutes.

Dwight can't be moved up the list, but I thought he played fantastic. Nothing spectacular, but he didn't need to be. He needed to fill in when fouls were mounting on the other bigs, and he did. The guards were able to open up the huge lead because Purdue wasn't getting much of anything going inside even when we went to our 3rd big. That was huge. Getting the first and second bigs into foul trouble would normally be a problem for any team. Instead, the middle got absolutely clogged, and the ball started bouncing everywhere but throw the net.

As critical as I have been on Carlton, I am proud of how he responded last night. He came out and got rebounds and played good Defense. It helps when the guards are on their game but Carlton and Coleby allowed our guards to run and gun. this team is playing with a swagger and confidence that can beat anyone.

Did anybody notice that the experts from Bleacher Report picked Purdue 2 to 1 to win that game? Also, they listed Graham as 31 among pro prospects and didn't even have Frank in their group. I guess they didn't know that he would pick up 7 rebounds against that "tall" team.

I agree with Keegan about Vick being lucky he made that 360 dunk.

Another game or two like that for Mason and he could potentially pass Collins on the all time KU scorers list. Mason is passed Valentine now and is in 6th. Wow!!

In a one and done game situation each game is a big challenge. Each game one team wins and the other loses. Yes our Jayhawks have been winning big but the Ducks will try to end our season. As for the Vick 360 evidently he had confidence he could do that and the KU crowd enjoyed it. This game surely helped Mason to win the National player of the year.