Frank Mason, closing in on Wilt, tops ratings with 26 points vs. Texas Tech 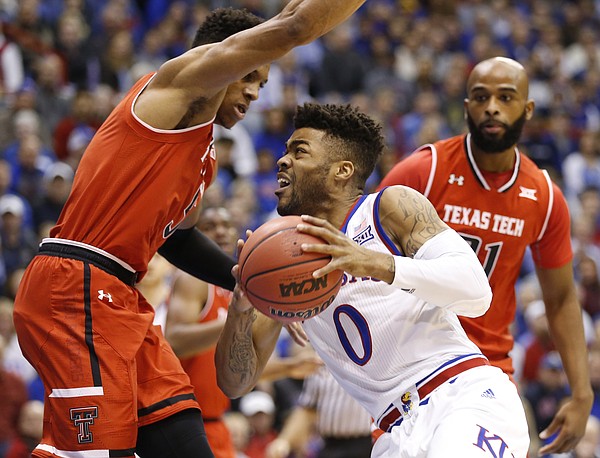 2 - Josh Jackson: Produced a double-double with 17 points and 10 rebounds to go with three blocked shots and two steals. It’s amazing how quickly he gets back up to rebound his own misses. Third time was charm on one second-half sequence and if he had missed that one he would rebounded it again and given it another shot. Blocked a shot on consecutive possessions to put a charge into the team.

3 - Devonte’ Graham: Made 4 of 8 3-pointers on way to a 20-point night and had a strong defensive performance in 37 minutes on the floor..

5 - Svi Mykhailiuk: Had five points and four rebounds during an off night in which he never quite looked right.

6 - Lagerald Vick: Too often looks indecisive, which keeps him from playing aggressively. Passive play is no way of taking advantage of terrific athleticism. He’ll get better by thinking less and rebounding more. Contributed six points, two assists and two steals, but had just two rebounds in 27 minutes.

7 - Carlton Bragg: Only player with a negative plus-minus for the night. Kansas was outscored by five points when he was on the floor. Still very shaky in traffic, surrenders too many rebounds he should own. Still not defending well without fouling. Had six rebounds in 17 minutes but should have had about 10. Needs to find a way to regain confidence.