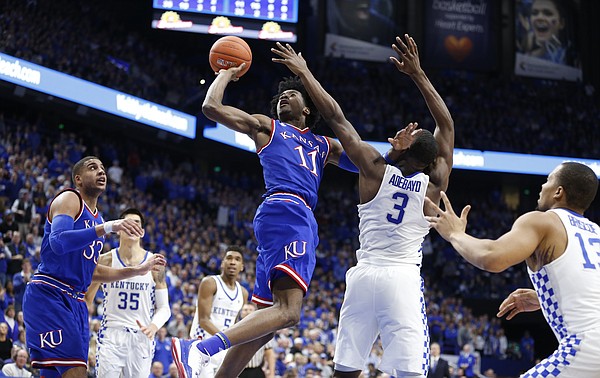 Kansas guard Josh Jackson (11) cuts to the bucket for a shot over Kentucky forward Edrice Adebayo (3) during the second half, Saturday, Jan. 28, 2017 at Rupp Arena in Lexington, Kentucky. by Nick Krug

1 - Josh Jackson: Started the second half by making back-to-back 3-pointers and had the game's biggest bucket when he ripped away an offensive rebound and put it in late in the game. Had 20 points, 10 rebounds, three assists and two steals with just two turnovers.
2 - Frank Mason: Boldly ventured in among big bodies and made shots over them on his way to a game-high 21 points to go with four assists and two steals.
3 - Landen Lucas: Made 6 of 6 field goals and his only free throw and scored 11 of his 13 points in the second half. Kansas had a 13-point advantage for the 27 minutes Lucas was on the floor before he fouled out.
4 - Devonte' Graham: Had some rough spots here and there and had just one assist and five turnovers, but never stopped playing aggressively and finished with 12 points and seven rebounds.
5 - Sviatoslav Mykhailiuk: Totaled eight points and two rebounds and had active hands defensively. Did not turn it over.
6 - Dwight Coleby: For a player who did not get onto the court in 7 of the previous 10 games and played just five minutes during that stretch, he didn't look too rusty. His big body was a factor defensively and he contributed three points, a rebound and a steal in 10 minutes.
7 - Lagerald Vick: The big stage was too much for him in the first half, as he illustrated by dribbling into a tightly guarded, rushed 3-pointer early in the shot clock. He took a seat for a long stretch after that one. Played better in the second half and finished with two points, three rebounds and two steals. Seems to play better defense in a zone when he reacts to the ball instead of trying to figure out how to balance helping and then recovering to his man.
8 - Mitch Lightfoot: Played four minutes, picked up an offensive rebound and put up one shot, which was blocked.

Landen played a solid game, but I'm concerned that with all his experience, and knowing how much KU was depending on him, he committed a couple of really dumb fouls and fouled out. I hope he learns from that and is more careful going down the stretch, because KU is sure going to need him to stay on the court in order to have any chance in the tournament.

Devonte' also turned Monk into a non-factor for much of the game. His D was really important.

Love that Dwight stepped up. There is no need for him to have virtually any stats as long as he can give Landen a breather and fill/create space as needed for the other players around him. We need his strength in the 4G lineup.