Devonte' Graham tops ratings vs. Texas with terrific first half 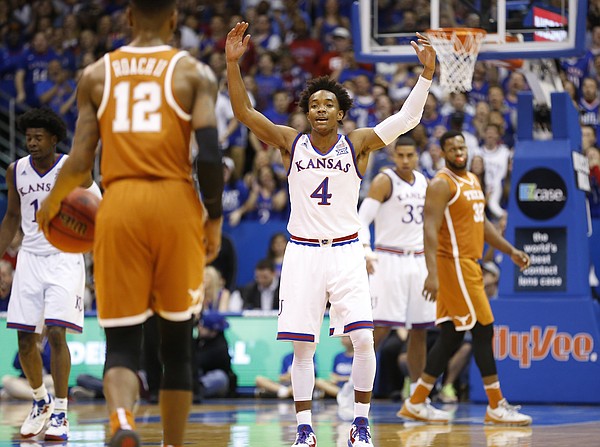 Kansas guard Devonte' Graham (4) raises up the Fieldhouse as Texas guard Kerwin Roach Jr. (12) brings up the ball during the first half, Saturday, Jan. 21, 2017. by Nick Krug

1 - Devonte’ Graham: Played so aggressively, yet so under control, in a remarkably efficient first half in which he made 5 of 7 shots, 3 of 5 3’s, scored 15 points, dished three assists without a turnover and contributed two steals. Moved over and let Frank Mason take over in second half. Graham didn’t score in the second half until drilling a 3 with 1:07 left to put the Longhorns down by 12 points and out of reach. Finished with game-high 18 points, five assists, five rebounds, no turnovers and three steals. Made 4 of 8 3-pointers.

2 - Frank Mason: Scored 12 of his 17 points in the second half and finished with seven assists and just one turnover. Made 2 of 4 3-pointers.

3 - Josh Jackson: Stole an interior pass on UT’s first possession and had three more steals, which partially offset a six-turnover day. Texas dared him to shoot 3’s and he did so with success, making 2 of 5 during a 15-point, five-rebound day.

4 - Svi Mykhailiuk: Made a couple of big 3’s and finished well with left hand, but had a bit of a sloppy afternoon. Totaled 12 points, four rebounds and three steals and turned it over three times.

5 - Landen Lucas: If it were a day off he would have stayed in bed because he was too sick to do anything else. Still, he laced them up, played 31 minutes and used his ability to gain position to grab 14 rebounds and block two shots. Missed all four shots from the field and scored two points.

6 - Carlton Bragg: Missed a couple of easy shots at the bucket, including one in which he went to the line and made both free throws. Contributed eight points and two offensive boards in 15 minutes, but also turned it over twice and didn’t have a defensive rebound. Again, 15 minutes without a single defensive rebound. Not good.

7 - Mitch Lightfoot: Coach Bill Self called his tip-in the best Kansas has had all season. Lightfoot also picked up a defensive rebound during his four minutes on the floor.

8 - Lagerald Vick: Remains a defensive liability because he hasn’t yet figured out how to provide help defensively in a way that enables him to recover to his man in time to prevent him from shooting 3’s. Totaled five points, three rebounds and two turnovers in in 18 minutes.

While you have Josh rated third, I think this was one of his poorer games. He looked lost at times on defense, failing to stay with his man, or switch off at the appropriate time. His ball handling was lacking and had some interesting shot selections. His motor wasn't what we have seen in prior games. His talent helps him stay near the top and keeps him vital to the success of KU. Just saying that he looked more like a freshman in this game than others.

I would agree with that. Could be in midst of freshman wall, but soon will break on through to the other side (love that Doors song).

Vick also had a half court violation at 6:57 (2nd), which somehow was not called. We have a high IQ team but Vick tempers the overall performance.

Jackson did a lot of downright bad things. 2nd game in a row his head was not right.