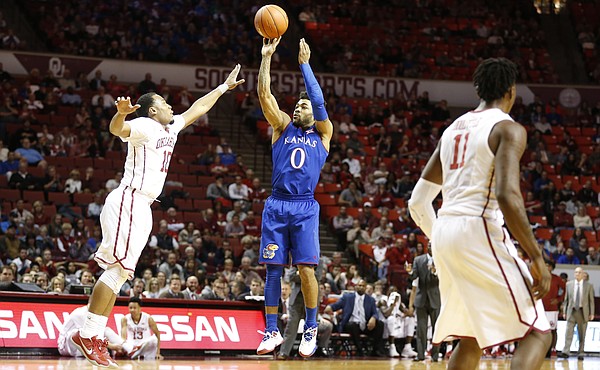 2 - Landen Lucas: Produced his third double-double in four games. Is doing terrific things without getting as much defensive help as he’s lending. Had 10 points, 13 rebounds and two assists. Amazing length-of-the-court, two-hand outlet pass to Devonte' Graham.

4 - Josh Jackson: Scored 12 of 16 points in a strong second half. Missed all three 3-pointers and is shooting .257 from long distance.

5 - Sviatoslav Mykhailiuk: Terrible first half but rallied to finish with nine points and nine rebounds and has answered a streak of eight consecutive double-figures point totals with two single-figure outputs.

6 - Lagerald Vick: In experienced showed. It will be a while before he figures out how to make terrific athleticism and soft-shooting touch translate to efficient play.

7 - Carlton Bragg: Came out strong, blocking two shots and then faded into oblivion, where he has spent much of his sophomore season. Played 10 scoreless minutes with one rebound and three blocked shots.

8 - Dwight Coleby: Picked up a rebound, a turnover and a foul in two scoreless minutes.

9 - Mitch Lightfoot: Played one minute, missed a shot, turned it over, committed a foul.

Lucas would be sensational if he could finish at the rim a bit better!