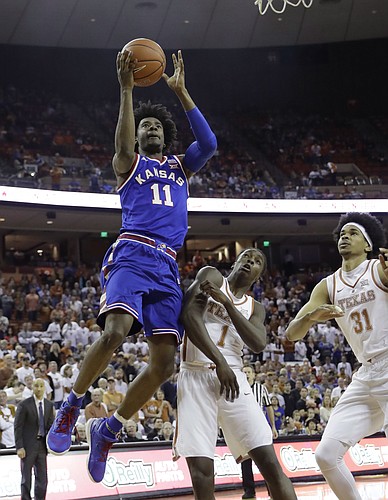 1 - Josh Jackson: Shots when flying to the hoop rimmed out, but he had active 38 minutes. Made just 3 of 11 field goals, but hit 2 of 3 3-pointers. Came to Kansas with an ugly shot and has worked hard with shot doctor Kurtis Townsend to make it better. Has made 19 of 35 3-pointers (.543) in last 11 games. Led Kansas with 18 points and had five rebounds and five assists. He's such a gifted passer.
2 - Devonte Graham: Played under control most of the time at both ends on his way to 12 points, three rebounds, four assists and two steals.
3 - Frank Mason: When Texas drew close in the second half he got to the paint and then the free-throw line. His 26th game with at least one 3-point field goal wasn’t assured until four minutes and change remained. Made just 5 of 15 field goals and had 16 points, three rebounds, three assists and three turnovers.
4 - Landen Lucas: Eight points, eight rebounds, two assists and a steal and didn’t miss a shot in 38 minutes.
5 - Dwight Coleby: Dwight Coleby 12 points in 13 minutes? What next, is Bill Walton going to remove his shirt and replaced with a tie-dyed "Keep Austin Weird" T-shirt on air during the game? By far best game as a Jayhawk. The more distance he puts on acl surgery, the better he becomes. Not real quick, but strong with good hands. He made 5 of 6 field goals, all at the hoop and totaled 12 points and four rebounds in 13 minutes.
6 - Lagerald Vick: More attentive as a rebounder, he picked up four off the defensive boards to go with seven points in 24 minutes. Definitely on the upswing.
7 - Svi Mykhailiuk: Missed all five shots, all of them 3-pointers, and did not have an assist. Vick has been playing better than him of late.
8 - Carlton Bragg: Two fouls in three minutes and didn’t return. Disappointing coming on the heels of a good game.

Svi had two points on free throws early in the first half.

I thought Coleby was KU's best player today. He was very active and provided some big plays, mainly in the first half. Everyone else was off his game in one way or another.

"Best player" is an over-statement. It certainly was a great leap from previous performances and augurs well for his finishing the season strong. His emergence from recovery to solid contributor (if it continues) bodes well for relief of some pressure on Landen as lone post presence.

I love Jackson's game, but what was with the number of missed layups? He kept getting to the basket and then poof, no goal.