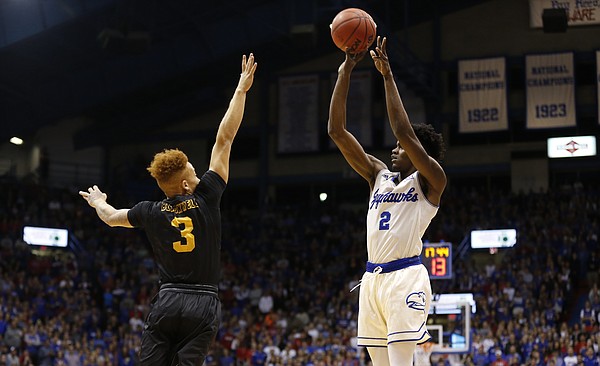 2 - Frank Mason: He changes paces so well and stays under control at any speed. Did an amazing job of making defenders trip all over themselves so that he could set up teammates for open shots at the rim and beyond the arc. Had no ego issues about letting others score the points. Finished with eight points, six rebounds and eight assists in 28 minutes.

3 - Devonte Graham: So quick at both ends and such a good finisher at the rim, Graham made 5 of 7 shots overall, 2 of 4 from three and contributed four assists (three turnovers), two steals and 12 points.

4 - Josh Jackson: Made remarkable passes in the first half and as always hit the floor hard chasing loose balls as if they were multi-million-dollar contracts. Grew sloppy in his final few minutes and dribbled his way into a stat line (four turnovers) that didn’t accurately reflect another terrific game. If you missed his bounce-pass to Svi in transition, don’t sweat it. It’ll be on the highlights for quite some time.

6 - Udoka Azubuike: His arms reach so far back to bring in off-target passes that he sends home with rim-bruising slams. Contributed eight points and seven rebounds in 23 minutes.

7 - Carlton Bragg: Came off the bench, picked up two fouls in less than a minute, and watched the rest of the half. Things went way better in the second half for him, at least until he committed a foul that nullified Vick’s breakaway bucket, which would have made Vick 10 for 10 and given him a share of the Kansas record (Norm Cook and Danny Manning) for most shot attempts without a miss in one game. Totaled six points, six rebounds, three fouls and two turnovers in 11 minutes.

8 - Dwight Coleby: Has played 40 minutes and has 14 rebounds, including five in 12 minutes vs. Long Beach. Blocked a shot, giving him six for the season. Has scored just five points, but he can help without scoring.

9 - Mitch Lightfoot: Looked explosive on a jam set up by Coleby’s pass and picked up three rebounds and four fouls in seven minutes.

Where are the season standings for the Keegan Ratings???

Did he stop keeping track because the players were getting their feelings hurt?