Devonte Graham serves the stuffing for others vs. UNC-Asheville 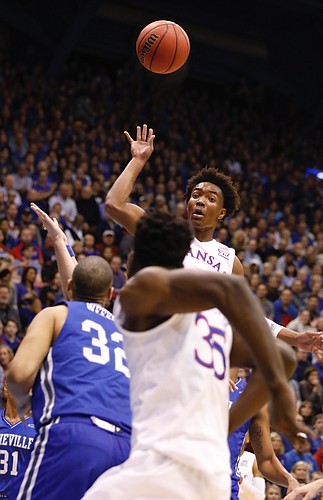 1 - Devonte Graham: Team-first attitude enables him to derive as much pleasure from setting up teammates as from scoring. Took just four shots and finished with six points, six rebounds, 11 assists and two steals. In the past four games, he has 29 assists and five turnovers. Made sure KU played at a fast pace and a high energy level. Instilled Udoka Azubuike and Lagerald Vick with tons of confidence by hitting them with passes in good spots. Executes fake passes in so many different ways, from facial expressions to ball fakes, etc.

2 - Frank Mason: Fives were wild. Shot 5 of 5 from three, had five rebounds and five assists and led the team in scoring for the fifth time in six games, this time with 21 points. Drew comparisons to Sherron Collins as a freshman because of his aggressive, fast style and ability to play bigger than his size. Comparisons still hold up. Collins averaged 13.2 points for his career with a high mark of 18.9 points as a junior. He shot .377 from three for his career. Mason’s averaging 21.5 points this season, 11.0 for his career and his shooting .395 from three.

3 - Josh Jackson: By halftime he was a threat to produce a triple-double with 10 points, four rebounds and five assists without turning it over and his best play of the half was his last. After missing a free throw, Jackson dove to the floor to gain possession of a loose ball, a hustle play that enabled Lagerald Vick to steal an extra basket, one second before the buzzer. Great play. Jackson finished with 14 points, four rebounds, seven assists, three blocked shots and two steals in 29 minutes.

4 -Udoka Azubuike: Responded to his first starting assignment by producing 11 points and three rebounds in the first half, by which time he had been whistled for two traveling violations. Both came on the same move: He took an extra step sweeping into the lane from the left block to set up hook shot. Finished with 17 points, seven dunks, three rebounds, three blocked shots and three turnovers in 23 minutes.

5 - Lagerald Vick: Started and repaid coach for confidence shown in him with 15 points and nine rebounds. Made 6 of 7 shots from the field, 3 of 4 from beyond the arc. Had missed 13 threes in a row coming into the night.

6 - Carlton Bragg: Came off the bench and committed two quick fouls. Finished with four points and five rebounds in 12 minutes and didn’t commit any additional fouls.

7 - Landen Lucas: Picked up two quick fouls after coming off the bench and those were his only of the night in 12 minutes. Totaled six points and four rebounds.

8 - Svi Mykhailiuk: Made 1 of 5 inside the arc and 2 of 4 three-pointers and had eight points, two rebounds and two assists.

9 - Dwight Coleby: Played just three minutes and had three rebounds and made 1 of 4 free throws.

10 - Mitch Lightfoot: Made a three-pointer and had four rebounds in two minutes.

Will there be an ongoing, season tally of the ratings as in previous years? I know there are a couple of games that weren't given ratings, but that can be rectified. I'm willing to do it pro bono. I really enjoy seeing the accumulation of the ratings over the course of the season.