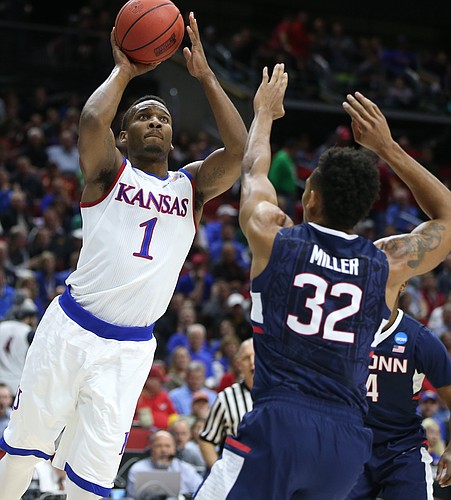 Kansas guard Wayne Selden Jr. (1) leans in for a shot over Connecticut forward Shonn Miller (32) during the first half on Saturday, March 19, 2016 at Wells Fargo Arena in Des Moines. by Nick Krug

1 - Wayne Selden Jr.: Devonté Graham stole the ball at mid-court and a Kansas fan seated in the front row immediately said, “Lob to Selden.” Sure enough, bam! But there was no way of knowing that Graham would throw it up that high and Selden would punish the rim that much. Selden defended well and contributed 22 points, seven rebounds, three assists and a blocked shot to the cause.

2 - Perry Ellis: He repeatedly was the tonic for scoring droughts and scored in such a wide variety of ways. His pet moves, even though scouted well, can be impossible to stop. For example, when he drives left, he likes to spin to the middle, but does it so quickly that even the defender who knows it’s coming can’t keep up. His jumper was on from every distance, enabling him to make 9 of 12 field goals, including 2 of 3 three-point shots. Finished with 21 points and eight rebounds.

3 - Landen Lucas: Blocked UConn’s first shot, a Sterling Gibbs drive, to let the Huskies know right off the bat that points in the paint would not come easily. One of the nation’s most improved players finished with six points, 12 rebounds, four assists, three blocked shots and a steal. In the first half, he had almost as many rebounds (eight) as the entire UConn team (11).

4 - Devonté Graham: Made 2 of 5 three-pointers on the way to 13 points, five rebounds and a huge steal he turned into a lob for Selden.

5 - Frank Mason III: Rough shooting night (1 for 8), but he mixed it up and chased down five rebounds and made 5 of 5 free throws.

6 - Jamari Traylor: Had three blocked shots, including one heard ’round the world, a line drive that whistled out of bounds. Definitely energizes team on the defensive end.

7 - Carlton Bragg: Went after offensive rebounds hard during his four minutes. Missed a put-back, retrieved his own miss and put it off the glass and in for a bucket.

8 - Brannen Greene: Scoreless in nine minutes with one rebound, he did not attempt any shots.

9 - Svi Mykhailiuk: Scoreless in six minutes, he missed his only shot, had a turnover and made 1 of 2 free throws.

Kansas does not lose when Wayne Selden plays well.

I saw somewhere that Sterling Gibbs was really on Frank the whole game. I saw where he got hit in face twice and stayed cool. I think he was just trying to be poised and let his team do the talking. Could he be hurt?

Mari was far better than frank in this game