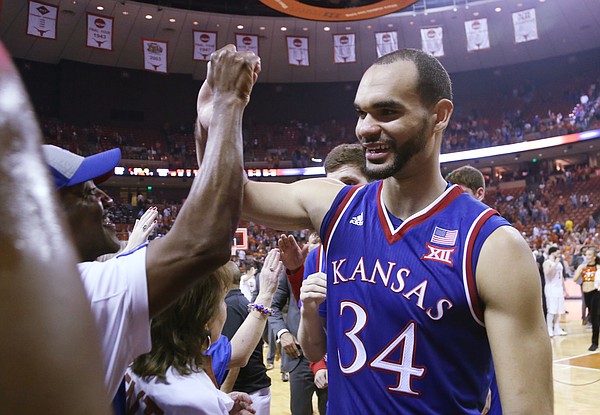 Kansas forward Perry Ellis greets fans as he exits the court after an 86-56 win over the Longhorns Monday, Feb. 29, 2016 at the Frank Erwin Center in Austin, Texas. by Mike Yoder

1 - Perry Ellis: Made 9 of 11 shots, drove the ball aggressively, using his superior quickness to get to the hoop and made his lone three-point shot attempt. Ellis scored a game-high 20 points and had four rebounds and four assists.

2 - Frank Mason III: Knew when to pull up and shoot, and when to drive to the hoop. Made great decisions all night, did a terrific job of keeping Isaiah Taylor from scoring (five points, 1 of 10 shots, one assist) and from breaking down the defense to set up teammates. Mason made 5 of 6 shots and all three three-point shots.

3 - Devonté Graham: Played aggressively at both ends and contributed 13 points, seven rebounds and two steals, but also turned it over four times. Graham made 4 of 6 field goals and 3 of 4 three-pointers.

4 - Landen Lucas: Set the defensive tone early, picking up three of his five blocked shots during the 15-0 start to the game. He also had eight points and eight rebounds. He’s played so well the second half of the season. Amazing improvement.

5 - Wayne Selden Jr.: Shot looked better and he made 2 of 5 three-pointers on his way to a nine-point night.

6 - Jamari Traylor: Quick, somebody check to see if he has landed yet from that lob he threw down. It’s not often players soar that high during a game. Wow! Scored eight points and defended well in 15 minutes, but didn’t have a rebound.

9 - Carlton Bragg: Fought as hard on the floor for a loose ball as a player can fight. Also picked up two rebounds, two fouls, an assist and a steal.

10 - Hunter Mickelson: In four minutes, came away with a pair of rebounds and a fluid late-game dunk. Also missed a pair of free throws.

11 - Lagerald Vick: Played three minutes and made his only shot, a three-pointer, naturally.

12 - Cheick Diallo: Played three minutes and made 2 of 4 free throws.

If Frank and Perry are both playing well, there's no stopping us.

Last night showed us that when the Top 8 play well, we beat any team out there.

This is shocking given that according to the CL "experts" Ellis is incapable of scoring inside, especially against bigger players and a decent coach would have moved him to the 3.

I'm not sure who "CL "experts"" are but I certainly am glad that Coach stopped trying to force the square peg into the round hole (Perry as a low post-up scorer) in January 2015, and moved him more outside in a Niang-esque role. In fact, I think it was the ISU game last January when we first saw Perry as part of the "weave". That change was absolutely essential in getting defenders off of him so that he could use his moves without carrying an extra 200 lbs or so.

Perry is scoring in the paint, and always has had a variety of moves to accomplish that, but how many times Monday were his plays initiated from the low post. Not many if any. Perry is scoring in the paint because he is losing defenders in an array of moves en route to the basket. There is virtually no one in D1 with the D footwork to match his O footwork, especially when starting 20 feet (+/-) from the basket.

I'm only disappointed about three things from last nights game: we got beat pretty bad on the offensive glass, we didn't hit FTs down the stretch, and we only played Cheick for 3 minutes in a blow out. I'd have gladly won by 20 if it meant Diallo could have played 12 minutes. He so sorely needs the reps.

Sorry about your Pain. Hard for me to find any pain.

I do wish they made more FT's, but it is easy to overlook when everything else was clicking the way it was.

Mr. Keegan, I enjoy reading this players ranking. it would be nice if you also include "most improved player" meter. What do you think?

I know they track floor burns, but does anyone know if they track leaving the court to save balls? I don't recall anyone doing more of that than Wayne. Just amazing.