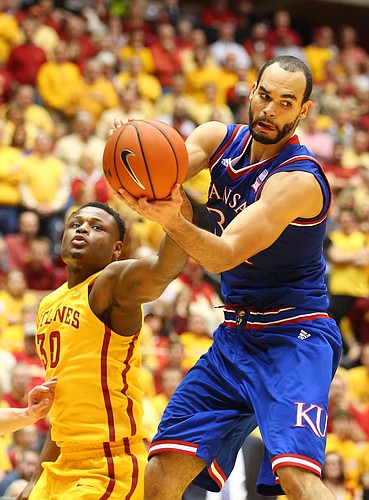 1 - Perry Ellis: Was matching Georges Niang shot for shot for a stretch, and was the one Jayhawk whose performance never dropped off when the Cyclones took control of the game. Shot 6 of 10 from the field in the second half, when the rest of the team shot 4 of 15. Scored a game-high 23 points and played hard for 36 minutes.

2 - Brannen Greene: Contributed nine points, four rebounds and three assists in 24 minutes. Made 2 of 4 three-pointers (was slapped on the side of the hand on one of his misses without drawing a whistle) and made Iowa State account for his whereabouts at all times.

3 - Frank Mason III: Looked like his old self in the first half, driving hard to the hoop, but didn’t do a good job of securing the ball in the second half. Finished with 16 points, six rebounds, three assists and six turnovers.

4 - Devonté Graham: His enthusiasm is a plus. Now it’s time for him to take the next step and show some tough love to teammates when they deserve to hear it. Finished with seven points, four rebounds and four assists.

6 - Wayne Selden Jr.: Made just 1 of 6 three-pointers and had just two rebounds and one assist. Has not been as good a player in Big 12 action as in non-conference games.

7 - Carlton Bragg: Had two points, two rebounds and a turnover in six minutes.

8 - Jamari Traylor: Picked up two quick fouls and wasn’t a factor for the rest of the night.

9 - Cheick Diallo: Four minutes, zeroes across the board.

11 - Lagerald Vick: Played one minute and took his requisite three-pointer, missing this time.

Away game at a mid-tier conference foe. Second-ranked player played 24 min. off the bench. Looks like the 3-guard lineup is stuck in the mud.

Weighted rankings for the conference season:

Maybe something wrong with Mason. Or maybe he uses (or needs help for his body) from pot?. How can they play well for 3/4 of a game then blow it apart?

When the going gets tough, you turn to your point guard. ISU did.

Kudos to Monte Morris. Message to Snacks: better recruit somebody...

Morris is without question, the best point guard in the league.

4-Star point guard. Ranked 96 in the country, 21 at his position. Not recruited by Kansas.

Kansas was actually playing against him last might, not against him when he was in high school.

Ellis: Played like a beast but he did miss a couple chip shots. His drive was important for this Kansas team on this night. I actually saw some fairly decent block outs on his part which was a big reason why KU actually won the rebounding battle.

Lucas: Played some solid defense and had some big rebounds. I did not agree on a couple of the fouls he picked up which was unfortunate, though not game changing. He is such a liability offensively and energy wise though I'm not sure I see him keeping a big role.

Wayne: What happened to Korean Wayne? The guy who attacked and used his attack to get guys to play off of him a bit so he could spot up from 3? The guy who did all the intangibles like play hard defense and dive for loose balls? He just almost seems depressed out there these days, completely disengaged from the game. I hate to see that. He's such a talented player it makes me wonder if everything is OK personally or if he might have some underlying injury again.

Graham: He's the only guy on this team who looks like he likes playing basketball. I would like to see him bring up the ball more and let Mason play more off the ball. I thought that's what coach had said to him and Mason this week anyway but that's not what happened during the game. That bank shot he made at the start of the game was my favorite moment of the entire game.

Mason: Such a tough guy and so fast. He would have had a great game if he had kept his composure and not pushed things when ISU got close. His pushing things led to the big turnovers that sparked the 11-0 ISU run that buried this KU team. I love Mason's toughness, but it's that same toughness that led him to bad decisions when things got tough. A huge reason I think we're better off with Graham controlling the point.

Greene: His shot is so clean. Anybody who knows me knows I have hated Greene since day 1 but he has started to grow on me. He actually plays with heart, attacks the boards, and seems to play more tough than he used to. He still can't play D, but neither can anybody else so it doesn't bother me like it used to.

Traylor/Diallo/Bragg: I would like to see some of these guys get some more minutes from Lucas. They all offer more offensively than Lucas and don't really lack anything on the defensive end (though Bragg can get beat up on the block when he's forced to play center).

The junior (Wayne, Jr, i.e.) definitely left something behind along with the MVP at WUG. Or maybe he was so stellar over there because of something he left back in Lawrence ...

Your comment on him playing as if depressed hit me since I am burdened by SAD myself. Has he ever tried a Sunbox light to help ?

Oubre looked pretty raw early last year, but once Self finally left him in, mistakes and all, he bloomed. Its time to do that with Bragg and Diallo. The Traylor/Mickelson/Lucas does NOT produce points. I'm talking hardly any. Not expecting them to bring 10 per game, but Lucas 2 points total after starting two games. That needs to stop. We can't put the whole offense on Perry, Wayne, Graham and Mason. They are burning out.