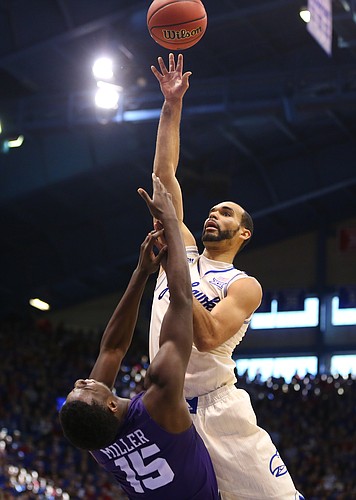 1 - Perry Ellis: Had to sit because of foul trouble and when he sits, the Kansas offense suffers. Played 25 minutes and totaled 10 points, nine rebounds, three blocked shots and a steal. Energized the team with an explosive dunk in traffic.

3 - Wayne Selden: Made some terrific passes, not all of which were converted. Totaled 11 points, four boards, three assists and a steal and turned it over twice. Shot lacked normal loft and made just 1 of 4 three-pointers.

4 - Devonte Graham: Scored all 10 of his points in the first 14 minutes and finished with six assists and two turnovers.

5 - Frank Mason: Couldn’t get his shot to drop and made just 3 of 10 from the field, 0 of 3 from three-point range. Committed just one turnover in 36 minutes and had six rebounds and four assists. Winced often from pain in padded left eblow.

6 - Carlton Bragg: Scored 8 of his 10 points and had all four of his rebounds in an impressive first half after Perry Ellis went to the bench with two fouls. His soft shooting touch is evident when he gets favorable bounces from the rim, which happened on two jumpers.

7 - Svi Mykhailiuk: Had an eye-popping spin move in the lane on his way to a bucket and finished with seven points in 13 minutes. Made just 1 of 5 three-point shots.

8 - Hunter Mickelson: Failed to convert on terrific pass from Selden, but made a nice pass himself during his five scoreless minutes.

9 - Jamari Traylor: Had four rebounds in eight scoreless minutes, his day ending when he took an inadvertent shot to the eye from Diallo.

10 - Brannen Greene: Due to catch fire one of these days. Took just two shots, both three-pointers, and made one.

A pretty lethargic effort today. Glad to see us use Bragg and Diallo more. Now 2 games where sci just doesn't have it. 1/5 with wide open looks.radio guy said it best, we need to develop a lineup that the guys can develop some rhythm together. What too fragmented and no timing between the players. It is time to stick with 7 or 8 guys playing period

It seems that every game, Hunter plays the first 5 minutes and nothing after that. It would seem that if he was either making mistakes that keep him out of the last 35 minutes of the game, they would eventually add up to removing him from the starting line-up. Then the next game comes along, and he's back to starting and playing the first 5 minutes, and only the first 5.

Just the opposite of how Hunter should be used – he could be a steadying player off the bench and his rebounding and defense are worth 8-12 minutes. Right now, he's just a stopgap until one of the frosh is ready ... I don't think either of them is quite there as a compliment to Perry. Mari and Lucas are valuable as change-of-pace guys and foul insurance.

I think Bragg looked great and he should have been ranked a lot higher.

By Keegan, or by Self?

Wayne is shooting a flatter shot? I had not picked up on that. I think Frank is passing up his in rhythm jumpers and then the forced ones are, well, looking forced.

Good point, Kent. I was concerned that Frank passed up a number of open threes that in the past he would have taken.

Frank is showing some wear and tear from excess minutes and fearless style. Using him and D'vonte together is an extravagance we use too freely, and takes development time away from other shooting guards. Frank is the one we can't do without for an extended stretch, so exposing him to that wear/tear risk for 35 minutes a game is just a sop to keep HCBS in his comfort zone. Cut him back to 32 minutes.