Perry Ellis shows off his 3-point skills vs. Wildcats 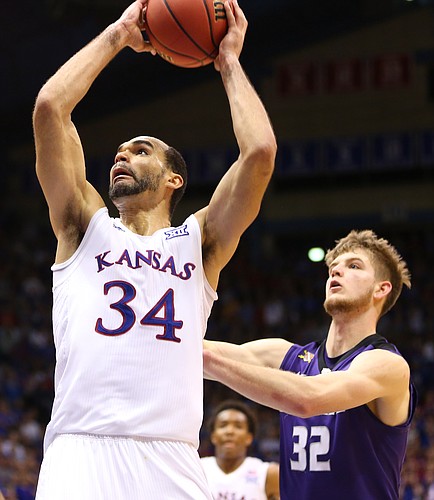 Kansas forward Perry Ellis (34) heads up for a dunk against Kansas State forward Dean Wade (32) during the second half on Wednesday, Feb. 3, 2016 at Allen Fieldhouse. by Nick Krug

1 - Perry Ellis: Senior is shooting 50 percent from three after going 3 for 3 on his way to a 19-point game. Had two steals and five rebounds. Made 8 of 11 shots from the field.

2 - Svi Mykhailiuk: Forgotten man had a night to remember with 10 points, four assists and three steals in 21 minutes off the bench. Good chance he’ll get big minutes again Saturday at TCU.

4 - Landen Lucas: Had eight points, six rebounds and played 25 minutes before fouling out.

5 - Devonté Graham: Made K-State play sloppy and had three steals. Made just 1 of 4 three-pointers and totaled 10 points, three rebounds and four assists. Turned it over twice.

6 - Wayne Selden Jr.: Failed to follow up phenomenal game vs. Kentucky with a good one. Played 24 minutes, made 1 of 5 three-point shots and 3 of 9 field goals. Totaled seven points, no rebounds and three turnovers. Some of his shots were ill-advised.

7 - Frank Mason III: His drives to the hoop sometimes amount to driving a bridge to nowhere. Opponents don’t foul him as often as in the past and he gets caught without an easy play. Made 1 of 5 shots.

Yet, as far as the coach was concerned, Greene had the most obnoxious night of anyone in the building. (Then again, the coach had no way of knowing about the woman who stood behind me the whole game screeching unbelievably loudly in my ear all night, damaging my hearing). Any way, back to Greene. He dunk with one second remaining, instead of dribbling out the clock, which absolutely infuriated his coach, who spent the rest of the night apologizing for it.

9 - Carlton Bragg: Scored two points, blocked a shot and had a turnover in five minutes.

10 - Cheick Diallo: Played two minutes in the first half.

There were at least a couple more times when I thought Perry should have taken an open 3. If he makes it more of his game, it will open up everything for everyone.

He only hesitated early in the game. He's always better from 3 once he gets going in the paint. So I liked that he passed up early and waited to get a couple layups before spotting up from outside. This is something Selden and Svi both need to do better about.

Dirk, I agree. Perry needs to start having an Alpha Dog mentality for us to be at our peak.

Why no Bragg 2nd half. What is this kid doing wrong? This year it just seems like Bill is watching a different game than everybody else.

He's awful defensively and foul prone. Bragg was bullied when he was out there. That's what he showed yesterday in the game everyone watched, Coach Self included. Perry had 19. Did you want him to sit?