Mason soars to top of ratings with amazing bucket and 20-point game vs. Stanford 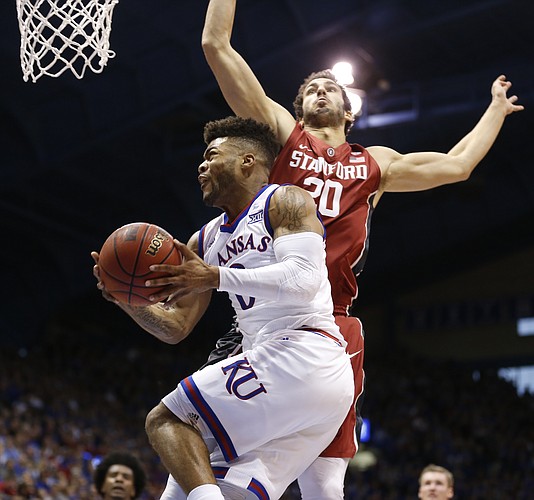 Kansas guard Frank Mason III (0) gets under Stanford center Josh Sharma (20) for a reverse layup and a foul during the second half on Saturday, Dec. 3, 2016 at Allen Fieldhouse. by Nick Krug

1 - Frank Mason: Actually flashed a smile after making an incredible shot on which he switched hands as a 7-footer crashed into him. Had a terrific day, especially in the second half. Finished with 20 points, four rebounds, five assists and one turnover in 35 minutes. Made 7 of 10 field goals and 2 of 3 threes. Another terrific performance from the senior.
2 - Devonte Graham: Was on fire in the first half, and in the second half had a beautiful pass fake that resulted in Josh Jackson throwing down a lob. Scored 15 points, all in the first half, when he made 5 of 8 three-pointers. Had three of his four assists in the second half and one turnover in 38 minutes for the game. Took one second-half shot.
3 - Josh Jackson: Had an out-of-control stretch during the first half but bounced back. Finished with 13 points, three rebounds, four assists, a blocked shot and three steals.
4 - Svi Mykhailiuk: Scored all of his 13 points in second half. Was hot from the right corner and made 3 of 5 three-pointers.
5 - Lagerald Vick: Sluggish first half but he awakened in the second half and produced one wow moment when he went back up so quickly with his own miss.
6 - Landen Lucas:Had three blocked shots in the first half and contributed eight points and five rebounds in 18 minutes. Missed some easy shots, but showed flashes of the player Kansas relied on heavily last season, just not enough of them. Gave himself a failing grade for defensive effort.
7 - Carlton Bragg: Encouraging rebounding performance from the player Kansas needs to hit the defensive boards hard. He grabbed six of them in 16 minutes and added seven points, two assists and a steal. Didn’t fare as well defensively.
8 - Udoka Azubuike: Threw a couple of nice passes without holding the ball too long, but had trouble playing without fouling against Stanford’s experienced big men. Totaled four points, four boards, an assist, three blocks and a steal. Has a long way to go, but has the talent and eagerness to get there.
9 - Dwight Coleby: Fouled out in seven rough minutes and picked up one offensive rebound and one point.
10 - Mitch Lightfoot: Had any offensive rebound and a steal in two minutes.