Josh Jackson in middle of action again to top ratings vs. Davidson 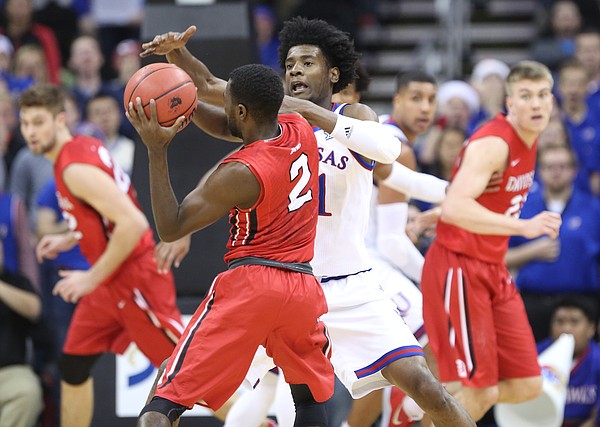 1 - Josh Jackson: He has the same nose for the basketball as a great linebacker does for the football. Always in the middle of the action. Opened the game with a hard drive down the middle of the lane, missed the shot, and a blink later was putting his own miss back in the bucket. Picked up five offensive rebounds during an 18-point, eight-rebound, three-assist, two-steal, one-block effort. Those stats don't reflect the countless other plays he makes to win possessions, such as when he made Davidson point guard Jordan Watkins pick up his dribble then traced the ball everywhere Watkins aimed it, forcing him into throwing a pass that Devonte' Graham intercepted. When the game got tight, Jackson drove to the hoop for buckets.

2 - Frank Mason: Did a terrific job of making Jack Gibbs work for his shots. Gibbs came into the game averaging 24.3 points per game and was limited to 12 points on 3-of-14 shooting.

3 - Devonte' Graham: Scored 10 points, had three assists, three steals and two blocked shots, didn't turn it over once and made all five of his field goals that weren't shot from outside the 3-point arc (0 for 3 from 3). Knows how to be a pest defensively and played aggressively at both ends.

4 - Svi Mykhailiuk: Looks really smooth and quick driving to the hoop, which he does more now than in younger days. Still just 19, Svi is "on the uptick," as coach Bill Self worded it. On a day he made just 1 of 5 3-point shots, he made all three attempts inside the arc. Contributed 13 points, four rebounds and three steals.

5 - Landen Lucas: His body's on the mend and his performance is keeping pace. Totaled eight points and eight rebounds off the bench.

6 - Carlton Bragg: Struggled early but came on strong in the second half. Produced 5 of 7 points and 5 of 8 rebounds in eight second-half minutes. Made 3 of 4 free throws and played well in traffic, not always a strength of his.

7 - Lagerald Vick: Played eight scoreless minutes off the bench in the first half and finished with eight points in 22 minutes. Must find a way to bring same energy as a reserve as he did as a starter or will have to wait a long time for his next start.

8 - Udoka Azubuike: Whistled for two quick fouls, he played just seven minutes and scored five points without picking up a rebound. Doesn't always keep the ball high and when he unconsciously brings it down, he no longer is big and he can lose it as he did in an alternate-possession play with the arrow pointing the other way.

9 - Mitch Lightfoot: Entered the game early, played four minutes and had two points to show for it.

Have Jackson and the rest of New additions to the roster earned roster pics?

Should the KU in Korea tab still be the lead item?

Svi is starting to show why so many have predicted him so high in the draft for so long. Started to look like a long tall euro-guard attacking the lane, and the rest of his game looks so much more solid as well.

We need to channel some '08 Sherron toward Vick. Coming off the bench, especially when given 20 minutes, is just as important as starting. If he doesn't, you'll likely see us subbing in more big line-ups.

Match ups will have a great deal to do with aging time. Against bigger lineups Lightfoot or Coleby might play more than Vick.