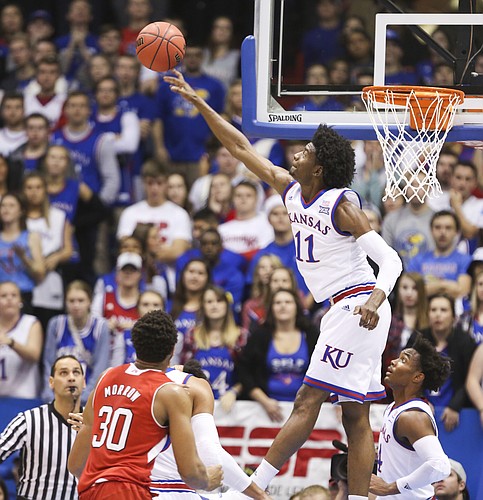 1 - Josh Jackson: The game tipped off and he took every possession as a lengthy possession winning streak was on the line and he was about to set the record for most consecutive possessions won. Was all over the court in the first half. Helping off his man to block shots, or swatting his man’s down low, Jackson finished with five blocked shots to go with 17 points and six rebounds.

2 - Frank Mason: Has become such an efficient player that he’s capable of having a quiet game with a loud line in the box score: 17 points, four rebounds and seven assists without a turnover. Made 2 of 4 threes and is shooting .548 from long distance.

3 - Devonte’ Graham: His play of the day came when his pass just past midcourt was blocked. He caught it, executed a spin move without dribbling, drove into lane and hit Jackson, who cut along the right baseline and finished the play with a dunk. Graham barely beat the first-half buzzer with a 30-foot jumper on his way to 14 points. Made 2 of 4 threes and bumping his three-point percentage to .435.

4 - Landen Lucas: Decided not to wear a boot on his sore right foot, which he said cleared his mind. Delivered a game reminiscent of his junior season with 12 points, seven rebounds, two assists and two steals. Shot 5 of 5 from field and 2 of 2 from line.

5 - Svi Mykhailiuk: Scored 13 of his 15 points in a very active first half. Only thing soft about his first half was his shot. He drove it and dunked it hard. Cheated himself and team of two points when he bypassed breakaway dunk to throw it off backboard for Jackson, who went for a spectacular dunk and failed.

6 - Udoka Azubuike: Doesn’t quite have the hang of always being ready for a lob to come his way, but he did try hard and had seven points, six rebounds and four blocked shots to show for his 16 minutes.

7 - Lagerald Vick: Couldn’t figure out how to make an impact in 25 minutes and finished with three points and one rebound.

8 - Mitch Lightfoot: Three points and a turnover in five minutes.

Jackson was spectacular but it is clear from this game that his outside jumper needs more than just a little tweaking. He has no confidence at all in his shot and it is affecting his free throws as well. At some point teams will stop guarding him on the outside.

At one point in the distant past I spent a week at the Vic Braden tennis camp. I thought that I had a great serve but the staff took one look at it and advised me to completely redo the mechanics. It took nearly a year to develop the muscle memory to get serves in consistently but at that point my serve was exponentially better than the old version.

Jackson really needs a shot doctor to rework his mechanics. However both he and the KU coaches probably have little inclination to do so since a single season of college ball will not be enough time to reap the benefits. His outside shot will need to be addressed in the NBA.

You're spot-on, Michael, JJ needs to improve his shooting style a lot, before it's too late. His low confidence might be the reason why he's comfortably shooting off the glass or dribble n drive. I'm sure our coaching staff is working on his shooting. What I observe is his elbow is not always straight, his fingers are still not focusing to 1 point, he twists the ball instead of rolling it, he hasn't consistently used his wrist when releasing the ball, he needs to raise his shooting arm higher and his feet are sometimes too wide when taking a jumper. He needs to learn from Wiggins. Hopefully he'll get extra shooting drills at practice.