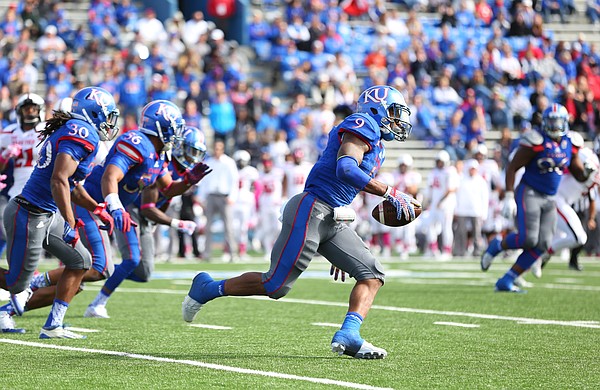 Kansas safety Fish Smithson (9) returns a fumbled ball by Texas Tech deep into the Red Raiders' territory during the fourth quarter on Saturday, Oct. 17, 2015 at Memorial Stadium. by Nick Krug

1 - Fish Smithson: Returned a fumble for a touchdown but penalty shortened it to a 56-yard return. Also had an interception in the end zone and a tackle for a loss.

2 - Daniel Wise: Had such a disruptive stretch in the game that Texas Tech resorted to holding him and double-teaming him to contain him. A red-shirt freshman, he has three more years to develop his strength and conditioning to become a player with whom defensive ends will enjoy seeing him helping them. Had five tackles, including a sack, and was credited with a pass break-up and a quarterback hurry. Also blocked an extra point.

3 - Joe Dineen: Looking at times like Ben Heeney light, Dineen had an especially strong first half and finished with 10 tackles, 2.5 for a loss.

4 - Ryan Willis: Showed a strong, accurate arm and serious confidence in leading Kansas back from 20-0 halftime deficit. Completed 35 of 50 passes for 330 yards and two touchdowns. Threw interception late on a far too ambitious throw and fumbled in the end zone. True freshman needs to take better care of the ball, but clearly has the talent to remain KU’s quarterback until he exhausts his eligibility, provided he continues to make strides.

6 - Tre’ Parmalee: Senior caught five passes for 84 yards and a touchdown. Team’s best receiver knows how to get open and is very creative in finding room to run after catching passes.

7 - Marcquis Roberts: Had eight tackles and continues to play well, despite aches and pains..

8 - Ben Goodman: Did a nice job of getting into the backfield and totaled eight tackles, one sack, 1.5 tackles for loss, and three quarterback hurries.

9 - Dorance Armstrong Jr.: True freshman defensive end was flying at the quarterback all day, teamed up on a sack, was credited with one quarterback hurry and had three tackles..

10 - Jeremiah Booker: Making up for lost time since returning from a broken collarbone, Booker has become the receiver Willis targets most often. Had seven catches for 65 yards.

Ryan may have shown his age late in the game but I am really liking this kid and praying he does not suffer the same fate as his 3 predecessors.