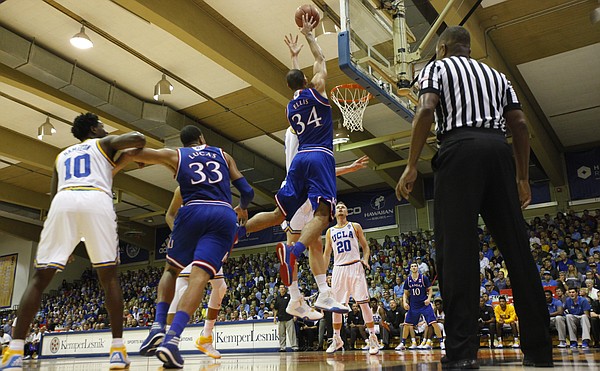 Kansas forward Perry Ellis (34) gets up for a bucket during the first half, Tuesday, Nov. 24, 2015 at Lahaina Civic Center in Lahaina, Hawaii. by Nick Krug

2 - Devonte' Graham: Infused team with energy at both ends and had three steals. Had nine points, three assists and just one turnover.

3 - Frank Mason: Totaled 16 points, five rebounds and seven assists and made sure Kansas maintained a fast pace. Made 4 of 5 field goals and 8 of 9 free throws, drawing fouls driving to the hoop. Did not turn it over once in 31 minutes.

4 - Wayne Selden: Has started the season on a tear from long range, making 13 of 23, including 4 of 5 in this one. Played 33 minutes and had 15 points, three assists and just one rebound

5 - Sviatoslav Mykhailiuk: Played with strong confidence again, even though he made just 2 of 9 three-pointers. Made 3 of 4 shots inside the arc. Also picked up four rebounds in 22 minutes.

7 - Carolton Bragg: Every time he shoots, it looks as if it’s going in. Scored just two points in this one but also had four rebounds in 10 minutes..

10 - LaGerald Vick: Played four minutes and made his only shot, a three-pointer.

Though we have plenty of vets, this is a team that, on paper, should get better and better as Svi, Devonte, Carlton and Lagerald grow into their roles. Vick may have the most trouble contributing because of the logjam at the guard position, but I think that these four guys could be the difference makers this year.

You know that Perry and Frank will bring it every game. You know what Jamari will bring, and perhaps Wayne is returning to his Korean form.

The four young guys may very well define whether this is a special season or not.

If Lagerald is a good defensive player we will need him a lot.

Graham should not be ranked ahead of Mason. I agree Graham played a great game, but Mason's offensive numbers are about twice as good. Mason shot a better percentage, had 78% more points (16 vs 9), more than double the assists (7 v 3) and zero turnovers. Mason also had fewer fouls (1 v 3), but still got to the free throw line 9 times compared to 2 times for Graham. Mason was clearly twice as good as Graham on offense.

If they would have only played Volleyball plus DeVonte has a bigger wing span. :)

Good rankings, I'd switch Frank and Devonte though. I seem to remember Frank having 2-3 steals as well.

How do you not switch Mickelson and Vick:)?

There is no way to a double/double using fouls. It is okay though because the perimeter was funneling them to you.