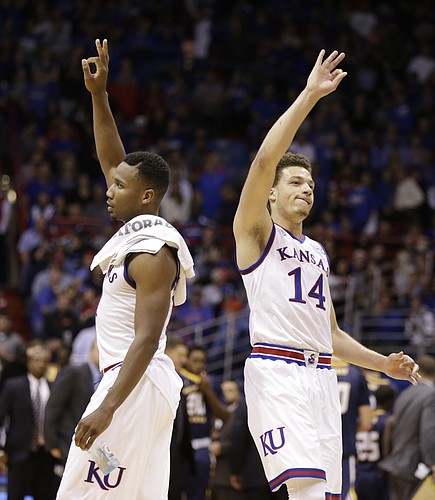 No. 1 — Brannen Greene: The reserve junior guard reminded everyone at Allen Fieldhouse just how lethal a 3-point shooter he can be. Although a nagging hip injury, which would require offseason surgery, made his jumper largely ineffective last last season, it appeared perfectly fine in KU’s season-opening rout of Northern Colorado. Greene drained all 5 of his 3-pointers, finished a perfect 6-for-6 from the floor with a drive and jam — of course that was set up by a pump fake from behind the 3-point line — and led Kansas with 18 points off the bench.

No. 2 — Wayne Selden Jr.: Bill Self only needed 23 minutes out of his starting wing, and Selden added to KU’s 3-point barrage with a 3-for-6 showing from deep. Finished with 15 points and, more importantly, dished 4 assists and spent a little short amount of time late in the second half as KU’s point guard.

No. 3 — Frank Mason III: A little bit of foul trouble in the first half meant a slow start for the junior point guard, but Mason proved too quick for the Bears in his 23 minutes. Mason nailed all three of his 3-point tries on the way to 11 points, and passed out 9 assists with 2 turnovers.

No. 4 — Devonté Graham: Making his first career start at Kansas, the sophomore point guard was the only Jayhawk who didn’t shoot the ball great (3-for-11), but he still made the offense flow, distributed 8 assists with 1 turnover, knocked down 2 of 6 3-pointers and scored 13 points. Graham’s 3 steals showed KU might be able to consistently create some takeaways on the perimeter to set up fast breaks.

No. 5 — Perry Ellis: The senior forward did what KU needs him to do offensively, putting up 16 points in 20 minutes. But Ellis only had 2 rebounds in the romp.

No. 6 — Jamari Traylor: Getting the start alongside Ellis inside, Traylor tied for the team lead with 7 rebounds, didn’t force the issue on offense and finished with 8 points (2-for-3 field goals, 4-for-4 free throws) and 3 assists, without committing a turnover.

No. 7 — Hunter Mickelson: Although the senior big was the fifth post player to see the floor, Mickelson blocked 3 shots and grabbed 7 rebounds in just 13 minutes, to go with his 2 points.

No. 8 — Carlton Bragg: Playing in his first collegiate game, the freshman big man made 3 turnovers and upset his coach a couple times with mistakes but looked comfortable at other times, finishing with 7 points and 3 rebounds.

No. 9 — Svi Mykhailiuk: With Greene scorching the nets, KU’s other reserve 3-point shooter took a back seat. Mykhailiuk made 1 of 2 from downtown, scored 5 points and showed flashes of improved defense, including around the rim when sliding over to help.

No. 10 — Landen Lucas: Only played 9 minutes, likely due to some nagging bumps and bruises, but scored 8 points and secured 3 rebounds.

No. 11 — Lagerald Vick: The freshman guard didn’t appear in the game until the second half. Scored 3 points, with his lone field goal coming on a high-flying jam.

Were going to need him!

That's what Mickelson is for

Brannen waas shooting better than 50% (60%?) from 3 before the injury last year. He's just returning to form.

Jamari had some really nice A's. Good to see each of the players full filling their roles. Now to see how that translates to an elite opponent.