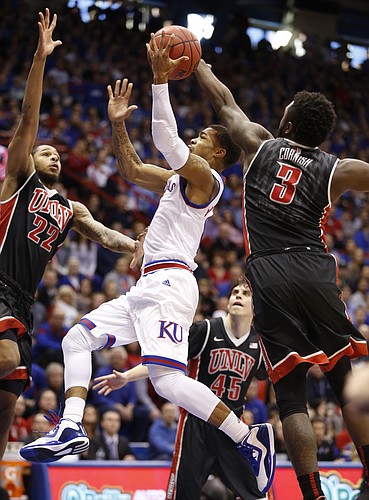 Kansas guard Frank Mason III (0) gets to the bucket between UNLV guard Jordan Cornish (3) and guard Jelan Kendrick (22) during the first half on Sunday, Jan. 4, 2015 at Allen Fieldhouse. by Nick Krug

1 - Frank Mason III: He makes the team play fast and he plays so aggressively that eventually the rest of the team follows his lead. Does an amazing job of finishing at the rim against players a foot taller. Three-pointer he nailed in the second half was the biggest bucket of the game. Scored 18 points and had seven assists. Would have scored 20, if not for an obvious goal-tending on his runner that did not draw a whistle. For a point guard to play 38 minutes so aggressively, his total of two turnovers might have been his best statistic.

2 - Kelly Oubre Jr.: He’s consistently active and productive. Had 12 points, 10 rebounds, three assists, a steal and didn’t turn it over. Made 2 of 4 three-pointers and again played a strong defensive game.

3 - Wayne Selden Jr.: Made a trio of three-pointers in the opening 3:55 and got hot again midway through the second half. Finished with 16 points.

4 - Perry Ellis: Sometimes dribbled into shots that were more difficult than the ones available when he caught the ball, but other than that had a productive day against taller defenders. Had 16 points, nine rebounds, three assists and a steal.

5 - Cliff Alexander: Many big men would have been startled into fumbling the ball when a driving Mason found Alexander wide open on the baseline for a short jumper late in the game. Alexander caught it cleanly and made the shot. Mason found him open again and this time Alexander dribbled himself into an uncontested dunk. Like Ellis, he dribbled into a tougher shot than he had when he caught it a time or two. Came off the bench with a burst of productive energy, faded and then played with terrific hunger in the second half. He’s getting there.

6 - Jamari Traylor: Made some rough decisions at both ends but hustled his way to four points, nine rebounds and three blocked shots in 27 minutes. Set a strong defensive tone from the start and showed he has a nice handle bringing it up on the break in the second half.

7 - Sviatoslav Mykhailiuk: Made a nice save in the corner and stole a pass from the baseline back to the perimeter, but was taken out after getting whistled for an extra step in the lane, limiting him to two minutes on the day.

8 - Brannen Greene: Forced one shot, a miss, in eight minutes and didn’t pick up a rebound.

I wondered about it, until I saw Wood play, who is an athletic stretch-big...He is a matchup problem for Lucas (who doesnt have the fastest feet). Lucas isnt one to get in a guard-like defensive crouch like TRob or Marcus could.

It seems Self is handling Lucas and Mickelson the same way he handled Withey. Some games Withey was at a quickness disadvantage (like vs. IowaSt).

Man, I simply love Mason's tenacity, as well as his 50% 3gun. But I get really worried every time I see him grab that ankle, which he did at least twice tonight after hitting the deck.

Much like Sherron & Tyshawn, Mason is giving 100% everytime he plays. I actually think Mason is playing as well as Sherron Collins (which is my high compliment to Mason).

What a joy to see 4 MickeyDs now actually beginning to play like Self-coached players.

Cannot wait for Graham to rejoin the party...we will need him down the stretch.

Svi should be playing more. His awareness on the court would make him a good back point guard at the very least. Nice win, though

I am sure he is being saved for the conference as our "secret weapon"! :)

100% agree TK, it was a nice win, especially against a tall team. Big step forward, still a few more to go but big step. Mason is playing at championship level so far every game this season. We would be lost without him.

Self has always cut down his lineup to 7 or 8 by conference season, with an occasional 8th/9th picking up a few minutes. I wonder if this game is foretelling of the lineup Self will be sticking with during conference season.

I'm a bit bummed by Mickelson's lack of PT. He's doesn't have the motor like Jamari (occasionally), but he's a proven shot blocker and provides a tad more length in the paint. Plus, he seems to have a bit more of a post game than Traylor.

Oh well. It's always 'the next guy off the bench.'