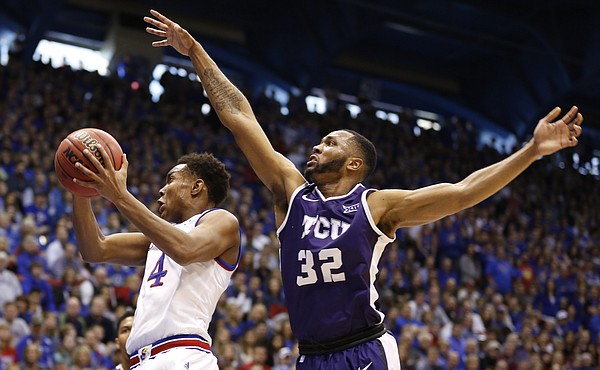 Kansas guard Devonte Graham (4) ducks under TCU guard Trey Zeigler (32) on his way to the bucket during the first half, Saturday, Feb. 21, 2015 at Allen Fieldhouse. by Nick Krug

1 - Devonté Graham: Freshman guard entered on a 15-game stretch in which he shot just .333 from the field. Busted out in a big way. Made all seven shots from the field, including two three-pointers. Totaled 20 points with three rebounds and three assists. Did nice job of getting to the paint and dumping off to Perry Ellis early.  Shoots well vs. TCU: 10 for 10 overall, 3 for 3 from three.

2 - Perry Ellis: One-hand flush of Frank Mason III’s lob on the break over Trey Zeigler sent the crowd into a frenzy and he made the free throw to put Kansas up 64-50. Seconds later, his steal and ensuing dunk made it 66-60 with 6:30 left. Ellis dominated early by posting up and teammates went away from him and he dominated again when they went back to him in the second half. Strong footwork put TCU’s Karviar Shepherd in foul trouble.

3 - Frank Mason III: Didn’t penetrate as well as he usually does in first half but picked it up the rest of the way and finished with 14 points, five assists (four turnovers) and a steal. Made 5 of 8 shots and all four free throws. Graham’s big day enabled him to get eight minutes of rest, which for him is unusual.

4 - Brannen Greene: Did excellent work on the defensive boards and was active in all areas on his way to nine points and six rebounds in 20 minutes. Picked up a rare steal, his fifth of the season. His mere presence on the floor makes for more room for teammates, thanks to the respect opponents show him because of his shooting range.

5 - Jamari Traylor: Put pressure on the defense with drives to the hoop and scored eight points and blocked a shot. Still needs to do a better job on the defensive boards, where he had just two in 24 minutes.

6 - Wayne Selden Jr.: Didn’t have his best day in terms of feeding the post, where Ellis made himself available, but wasn’t always spotted.

7 - Cliff Alexander: Started, but in 11 minutes he didn’t seem 100 percent sure of himself and too often stood still. Had two points, two rebounds and a blocked shot.

8 - Kelly Oubre Jr.: Lazy pass from the point to Trey Zeigler, Oubre’s man, on the left wing was begging to be intercepted, or at the very least deflected. Oubre didn’t challenge it. It’s plays like that that keep him from being as disruptive a defender as he could be when he’s not at his most active. Had he stepped into the pass and taken it all the way, it might have spurred him onto a big day. As it was, he played 19 scoreless minutes with one blocked shot and two steals. Missed all three shots from the field, one of them blocked, two of them three-pointers.

9 - Landen Lucas: Played nine scoreless minutes without a rebound and missed all three shots from the field.

I'm curious ... how many times this year has a freshman been Keegan's choice as top-performing Jayhawk in a game?

Is D'Vonte the third or the fourth frosh to garner that spot?

Did he get enough minutes to do it today because he played well enough to stay on the floor, or because TCU is easy enough to beat with any lineup we put out there?

I like Traylor's aggressiveness to the basket in this game. Even if he missed, he cost TCU fouls#. But somebody has got to tell Traylor to stop that silly moving screen. He's done it so many times.

Still a major concern that Alexander and Ouibre are so insignificant at this point in the season. We are going nowhere without 8 players contributing to the game.