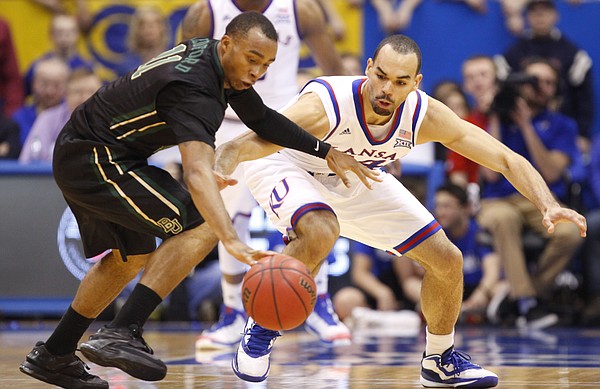 1 - Perry Ellis: Made himself the steady go-to guy and played two strong halves on the way to 18 points, six rebounds and emphatic yet unemotional blocked shot late in the game. Under the radar, which is where he lives, he is becoming more aggressive.

2 - Kelly Oubre Jr.: Spent the whole game on fire, made 6 of 9 shots and 4 of 6 three-pointers and like Ellis, produced 18 points and six rebounds. Didn’t turn it over once.

4 - Landen Lucas: Made the most of his 14 minutes by contributing nine points and four rebounds and hit a big jumper. Was on the court when Kansas finished the game so strong.

5 - Frank Mason III: Had trouble with Baylor’s zone in the first half but did a better job of setting up teammates in second half. Finished with five points and eight assists with two turnovers. Double-figures scoring streak ended at 21 games.

6 -Cliff Alexander: At times looked overwhelmed amidst all the long and/or big bodies. Had four points and five rebounds in 21 minutes.

7 - Brannen Greene: Visibly frustrated at being alone on the wing and not getting the ball, Greene was ready when Mason found him in the right corner and buried a huge three-pointer to give Kansas a 55-49 lead with 7:53 left. Teammates need to look for him more often. Landen Lucas found him the next time down with a great skip pass, but it didn’t go in that time. Teammates keep finding Greene like that and he’ll reward them, three points at a time. Made just 1 of 5 three-pointers, but he won’t have many such nights.

8 - Devonté Graham:  Is 0 for 7 in last three games, all scoreless efforts. Terrific heads-up play when Baylor’s Kenny Chery turned his head to the bench to listen to the coaches. Graham, who had been playing several feet off the ball, pounced on Chery and knocked the ball loose. Made another disruptive defensive play but needs to regain his confidence shooting.

9 - Jamari Traylor: Needs to get more than two rebounds in 12 minutes. Was scoreless and turned it over when he drove into the paint, got stuck and threw an errant pass.

Greene is now on everyone's scouting report, don't leave him open is their motto. Couple of his threes were off balanced, feet not set up. But with teams looking to stop him will open opportunities for other players.

One of Perry's best games of the season. I could not believe he ripped down a rebound or two, dunked the ball, great show of toughness. Here still got beat a few times on defense but yesterday everyone did.

Lucas was the man, he sparked runs in both halves and changed the lane for Baylor. His play bothered them. Nice finish to the game. He Tharped a ball into the stands but all in all a very nice game for him.