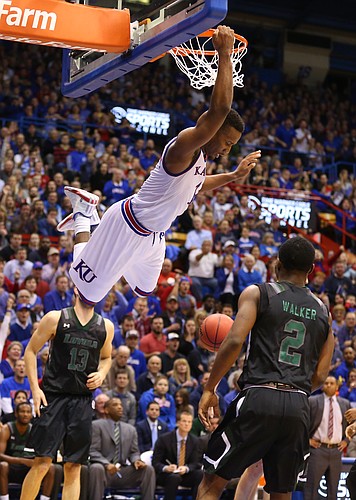 Kansas guard Wayne Selden Jr. (1) hangs on the rim after delivering a dunk against Loyola during the first half, Tuesday, Dec. 1, 2015 at Allen Fieldhouse. by Nick Krug

No. 1 - Wayne Selden Jr.: It’s not easy to control a game from the wing, but Selden managed on a night he totaled 18 points, six rebounds and four assists. He made half of his six three-point shots and is shooting .571 from long range on the season.

No. 2 - Cheick Diallo: Dribbled more than half the court, put his left hand behind his head and slammed it home with his right, sending Allen Fieldhouse into a manic state. In 10 second-half minutes, Diallo totaled 13 points, five rebounds and two blocked shots.

No. 3 - Jamari Traylor: Got his team off to a strong second-half start with disruptive defense, and in 14 minutes had six rebounds and a blocked shot. Has performed consistently well so far.

No. 4 - Frank Mason III: Threaded the needle on a bounce pass to the bucket from near half court. Amazing play from an amazing athlete. Made just 4 of 13 shots, but hit 2 of 5 threes and had five assists, six rebounds and four steals. The 5-foot-11 junior leads the team in defensive rebounding.

No. 5 - Devonté Graham: Picked up pace at both ends and finished with eight points, three rebounds and two assists.

No. 6 - Perry Ellis: Needs to do a better job of finishing through contact and hitting the defensive boards. Even on an off night he still contributed 15 points and six rebounds.

No. 7 - Hunter Mickelson: Landen Lucas was out with a toe injury and Mickelson made the most of his opportunity. Hustled his way to eight points, three rebounds and three blocked shots in 15 minutes.

No. 8 - Carlton Bragg: Missed shots at the bucket but was active, as always. Totaled four points, five rebounds (three on offensive glass) and a blocked shot in 13 minutes.

No. 9 - Sviatoslav Mykhailiuk: Watched more than he defended in the first half and dribbled his way into trouble too often in a poor first half. Played better in the second half and finished with 10 points in 16 minutes.

No. 10 - Lagerald Vick: Slammed home an offensive rebound, dished a pair of assists, had one turnover and went 0-for-2 from the line in 10 minutes.

I love Frank the Tank, especially how he can beat other guys off the dribble. But I wish he drove to pass more, rather than drove to score. Last year, he was one of our few offensive weapons. This year, the guys around him have improved offensively, which means he doesn't have to do it all himself.