1 - Wayne Selden: It was as if he drank leaded coffee and most of his teammates opted for decaf. Tried to make things happen with strong drives to the hoop and led team with 21 points.

2 - Joel Embiid: Did a great job setting himself well ahead of time and remaining completely still in taking a charge at mid-court that was called a block. Seemed bothered by UT’s physical interior defenders on a day the Longhorns blocked 12 shots.

3 - Jamari Traylor: Played 14 minutes and battled his way to six rebounds, five off the offensive glass. Didn’t commit a turnover, made 2 of 3 shots, had two assists, a block and a steal. Never let the lopsided scoreboard curtail his effort level.

4 - Frank Mason: Feisty, relentless competitor didn’t have enough company in that regard in this one. He drove it hard to the hoop, which gains him high ranking, even though he had trouble finishing. Totaled eight points, two assists and one turnover in 16 minutes.

6 - Perry Ellis: Had just two rebounds in 29 minutes on a day that Texas won the battle of the boards, 44-37. Didn’t match the physical play of the Longhorns.

7 - Andrew Wiggins: Made just 2 of 12 field goals and finished with seven points, five rebounds and two turnovers in 30 minutes before fouling out.

9 - Landen Lucas: Not quick enough to hang with Texas big men, he battled hard, as always.

10 - Brannen Greene: Made 1 of 3 threes, but was exposed defensively and had four fouls in 10 minutes.

11 - Andrew White: Four minutes, one rebound, no other stats.

12 - Justin Wesley: Played one minute and posted a trillion-club entry.

I am having a difficult time understanding how games are to be officiated. Would you ask Coach Self for some assistance for your readers during this week's presser. One of the many confusing calls was associated with the below photo, posted by the LJW. 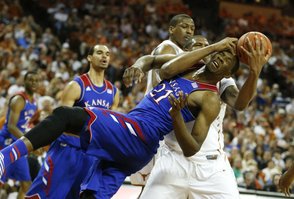 The charge/block remains unclear as demonstrated by the block called on Embiid.

While your at it, please ask about the contact allowed on the arm of three point shooters on plays like the block on Greene.

I realize it doesn't change the fact we were badly outplayed by UT in every aspect. Nevertheless in an 11 point loss, a play like Greene's can still have an impact. On that play UT scored 3 points onf FTs from the resulting fouls, which I also don't understand, instead of Kansas picking up 3 at the line. That's a real potential 6 point swing, which could make a difference in an 11 point game.

Mind you, I'm not complaining but only seeking a better understanding of the game.

Ohhh...one more...why was a foul called on Selden when he dove for a loose ball? Are Kansas players not allowed to touch any part of the opposing player on plays like this? Not even the shows?

I couldn't agree more. Two that stand out to me was a fade-away by Seldon where he was called for an offensive foul. To me there was no offensive foul at all. When watching it in real time, it's a play that would have been a basket, AND-1, 90%+ of the time. Another was when the technical was called on Mason. I believe there should have just been 1 foul, resulting in 2 free-throws. Instead, UT got 4 FT AND the ball. Those along with the ones you spoke of really could have changed the feel and potentially even the outcome of the game. Good points as usual Suzi.

Thank you for the post, Suzi. I would like a better understanding, as well; especially as to some of the fouls called against Embiid. I couldn't believe my eyes that the "take down" play was not reviewed, as well as the one in the previous game where he got tossed out of bounds. Like you, I don't think I understand the foul on Selden while diving for a loose ball. If fouls are called consistently, that's one thing. What we saw yesterday was quite another.

All that said, the lackluster effort by many on the team yesterday was pretty disappointing. One of the things I absolutely loved about the '08 team was their fire and hustle, and the ability to keep their feet on the throats of their opponents. I remember in the Davidson game in the NCAA tournament, it seemed that every call went Davidson's way, but our guys kept their focus and won in spite of it. Then there was the comeback in the championship game. That's Kansas basketball.