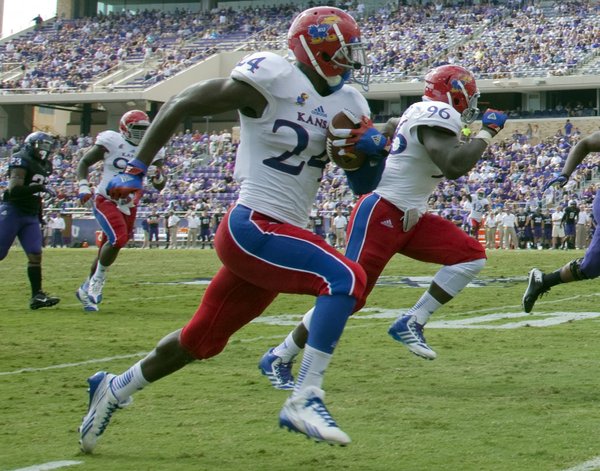 Kansas cornerback JaCorey Shepherd (24) takes a interception in for a KU touchdown against TCU on Saturday, Oct. 12, 2013. by Richard Gwin

1. JaCorey Shepherd: Returned his first interception 32 yards for a touchdown and forced a fumble on next possession that gave KU ball in favorable field position.

2. Victor Simmons: Knows how to use size and speed to his advantage from nickel back spot. Had a fumble recovery, was in on a sack and six tackles.

3. James Sims: TCU’s defense did a terrific job of closing holes instantly, but Sims still managed to grit out 81 rushing yards on 23 carries. As a receiver, he negated the good he did after turning screen pass into 30-yard gain, by cutting back to his right and fumbling.

6. Keba Agostinho: Senior D-lineman who is among most improved players on the team had an active day that included four tackles.

8. Andrew Turzilli: Ripped the ball from All-Big 12 cornerbck Jason Verrett for a 50-yard reception, but injured his leg on the play and never re-appeared. Has established himself as the team’s best deep threat, based on two catches, the first for a TD against Texas Tech. Season stats: Two receptions, 78 yards.

9. Isaiah Johnson: Had his second pick of the season and was in on a couple of tackles behind the line of scrimmage, one of the solo variety.

10. Kevin Young: Active day for the improved senior defensive tackle. In on a sack and had another tackle for loss and was a factor in TCU O-line not dominating the line of scrimmage.

James Sims shouldn't be number 3. That fumble is couldn't have come at a worse time and had a huge impact on the game. I would put Sims down at 9 or 10 at best because of how costly that fumble was.

Keegan makes it sound like he thinks that Sims shouldn't have attempted to cut back into the field. The defender made a good swipe at the ball, but there's no way that Sims should have dropped it. He did have the ball a little bit out away from his body while he was making his cut, but he wasn't waving it around recklessly. I think that he will probably tuck it away a little tighter next week if he ever finds some room to run.

That fumble may have cost us the game (we'll never know). I always think about the 2006 season when the team went 6-6 and missed a bowl game, but in 4 of the losses we led late in the game or had a chance to drive and win, and we didn't finish. Kerry Meier shortarming the endzone fade time after time. The defense failing to make a stop late in the 4th quarter against Texas A&M's Stephen McGee and Jorvorski Lane.

That KU team was better than this year's version, but they could have been 10-2. This year's team would be 4-1 if we had any evidence of an offense.

Has anyone else notice our 5 star transfer quarterback only has 3 points?