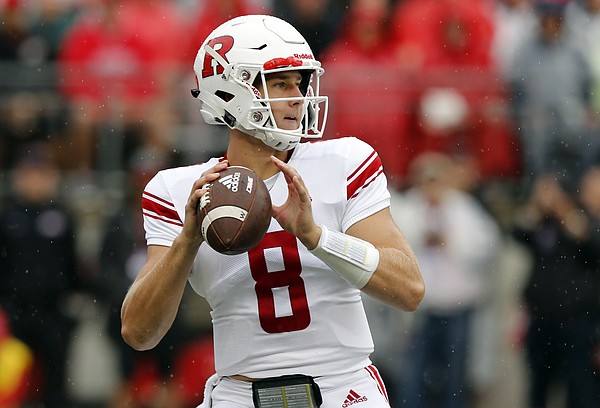 In this Saturday, Sept. 8, 2018, file photo, Rutgers quarterback Artur Sitkowski drops back to pass against Ohio State during the first half of an NCAA college football game in Columbus, Ohio. Kansas will be trying for back-to-back wins for the first time since 2011 when the Jayhawks face Rutgers on Saturday. The Scarlet Knights will be trying for a bounce-back win after getting trounced by fourth-ranked Ohio State last week. (AP Photo/Jay LaPrete, File) by Jay LaPrete, File (AP Photo)

The same sort of logic that made so many prognosticators overrate Texas coming into this season made a few of them paint way too optimistic a picture for Rutgers’ 2018 fortunes.

Second-year Texas coach Tom Herman received kudos for landing the nation’s third-ranked recruiting class. That’s nice, but what does that have to do with 2018? This isn’t basketball where a few McDonald’s All-Americans can carry the team to great heights. Rare is the true freshman (Pooka Williams) who can make a major impact, which brings us to Rutgers.

Pro-style quarterback Artur Sitkowski played his first three years of high school football at Old Bridge Academy in New Jersey and then transferred to IMG Academy in Florida for his senior season. He enrolled at Rutgers at the semester and participated in spring football. Sitkowski, now listed at 6-foot-5, 224 pounds, originally had committed to Miami (Fla.), but changed his mind and decided to play closer to home. Landing him was a big deal for Rutgers, which won three Big Ten games last season without strong quarterback play.

In time, Sitkowski very well could justify the excitement his recruitment generated, but that time isn’t likely to be any time soon. He has played three halves of college football. Sitkowski suffered a shoulder injury on a sack late in the first half of last week’s loss to Ohio State and didn’t play in the second half. Sitkowski completed 6 of 18 passes for 38 yards and threw an interception in a 52-3 road loss to the Buckeyes.

Obviously, Ohio State’s talent is so superior to that of either Rutgers or Kansas that drawing conclusions from those numbers doesn’t necessarily make for an accurate projection for how he’ll do for Saturday’s 11 a.m. kickoff at David Booth Kansas Memorial Stadium.

OK, but Kansas has better athletes on its experienced defense than does Texas State of the FCS, which Rutgers defeated, 35-7, in Week 1. Sitkowski completed 20 of 30 passes for 205 yards and a touchdown. Not bad, until considering he also threw three interceptions.

Third-year Rutgers coach Chris Ash said he expects Sitkowski will be available Saturday. Ash also could turn to redshirt junior Giovanni Rescigno has thrown seven touchdowns and seven interceptions during his career and has averaged 4.6 yards per attempt, completing 50.2 percent of his passes.

It’s a little premature to assume that because Rutgers landed a significant quarterback recruit it has a better offense than a year ago, when the Scarlet Knights finished 121st in scoring with an 18-point average (Kansas was 120th with 18.7).

Also, the Rutgers defense was weakened by multiple dismissals relating to eight players, some with remaining eligibility, others past players, being charged in a credit card fraud scam.

Kansas is favored vs. a Power Five opponent for the first time since 2009 for good reason. If KU doesn’t pick up its first two-game winning streak since the beginning of the 2011 season and snap a seven-game home losing streak, that won’t bode well for its chances of competing very often, even in a weakened Big 12.

Texas State is not an FCS team. They are an FBS program in the Sun Belt.

We've disagreed a lot, Aaron. I'm sure there will be disagreements in the future. But I appreciate your attention to detail. Often they matter. Rock Chalk.

We need to be scoring more than 24 points as an expectation. 4 years in, lots of returners and older team plus a legit running threat now. We should easily be in the 30's + with a team like Rutgers and if we have any hope of being competitive with some other B12 teams. I have an expectation of 35+ to 21- KU over Rutgers.

Have we forgotten that we still have the same coaches? I think we're getting a little overly optimistic based on one admittedly great game against a truly terrible CMU team. There's a reason KU is only favored by 2.5. I still think that KU will manage to squeak out a win, but I think it will be close. I'll say KU wins 24-21.

Same margin and about the same frequency as the Nicholl's State game, only in Kansas' favor. I can see that. But I'm still predicting Rutgers. Rutgers is not CM, and Kansas didn't pull away from them until the second half. Sometimes the early tone of a game dictates effort, mental condition for the rest of the game, and ultimately it's outcome. I say Rutgers by 2 touchdowns.

Rutgers is really bad this year too and might actually be worse than CMU. There's a reason KU is favored in this game. Nicholls St. is legitimately the best non conference team on KU's schedule this year. Winning this game doesn't change that KU is still a bad team and that Beaty will likely be gone after the Texas game this year. KU got incredibly lucky to have two teams as bad or worse than them on their schedule this year in the non conference.

I get pretty long-winded sometimes. Simple comment here: Great article, Tom. The latest in a string of them. Good job.

I am not impressed at all with the offense. We produced SIX turnovers in the win. Now with the SIX turnovers against Texas it still took overtime and with these SIX, we won comfortably, but our offense is still not very good. With the new offensive linemen, perhaps they will continue to gel and get better every game, but if it doesn’t, it’s sack city and three and out way too many times. We really need some confidence. We score early, get a turnover and force them to a couple quick three and outs, and we could have a chance. Warning ⚠️.....don’t drink the koolaid after one win.

Thinking KU can win 2 in a row against really bad competition isn't drinking the koolaid. This Rutgers team is really bad. Texas St. is worse than CMU and Ohio St. could've hung 100 on Rutgers if they wanted to.

The only other games I see on KU's schedule that are winnable for KU are KSU, Baylor, Tech, and possibly ISU. KU will need another strong defensive effort to hang with Baylor and Tech because they can't outscore those teams though. KSU can't score this year so that game will be close regardless.

For some two wins will be considered a successful season no matter who the wins were against believe it or not.

If Rutgers proves to be the right opponent at the right time then we finally have something to thank Charlie for.