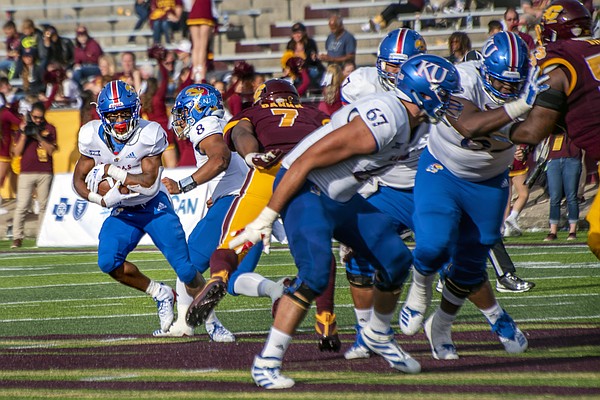 Pooka Williams has jolted a slumbering Kansas football fan base awake and it took him all of one game, his first in college.

How did he look on film to the coach who has to prepare his team to face a KU offense rejuvenated by the freshman running back who ran for 125 yards on 14 carries and in the second half gained 85 yards on six carries with touchdown bursts of 20 and 41 yards?

“He's a good little player,” third-year Rutgers coach Chris Ash said at his Monday press conference. “He was productive. He had a couple of explosive runs against Central Michigan.”

A good little player. Interesting choice of words. Williams appears shorter than his listed height of 5-foot-10 and packs a lot of muscle onto his 170 pounds.

“Kansas has some good skill players. They’ve got a couple of running backs that are good,” Ash said. “I think they've got several receivers who can run and make some plays. I think they've got a good scheme. But he did bring a different element to their offense in terms of the running game, and he's got the ability to take it to the house if you're not sound and you don't tackle well because he's really quick. He's got good speed.”

Daylon Charlot finna be the weapon they ain't see coming.

So why does DC struggle so badly to get playing time with Beaty?