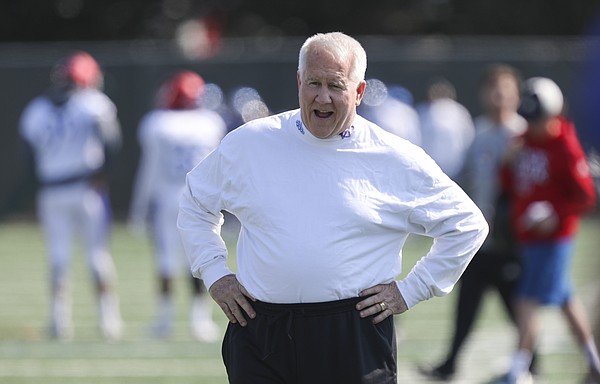 The most experienced assistant coach on David Beaty’s staff has deep recruiting roots in Kansas and Florida and has such a rich well of experience working for head coaches on which to draw in cobbling his own approach to running a college football program, should Kansas decide not let Beaty complete his fourth season.

Miller, 62, had two big-time recruits on the hook when Turner Gill decided not to retain him from Mark Mangino’s staff. Juco linebacker Lavonte David went to Nebraska, where he earned first-team all-conference honors in the Big 12 and Big Ten. A linebacker for the Tampa Bay Buccaneers since 2012, David earned first-team All-Pro honors in 2013, second-team distinction in 2016.

Bill certainly looks Experienced and Jolly! As they say in Milwaukee, "It's Miller Time"!

Are there any more “exit” articles you can do? Again, I hope our current coaching staff, school administration, AND especially student athletes, have completely ignored your writing.

Are you excited for the 2019 KU Football team under David Beaty?

If KU does let Beatty go, and hires one of Keagan's suggestions, and that coach turns out to be a bust, I hope Keagan voluntarily walks away and never returns to KUSports again.