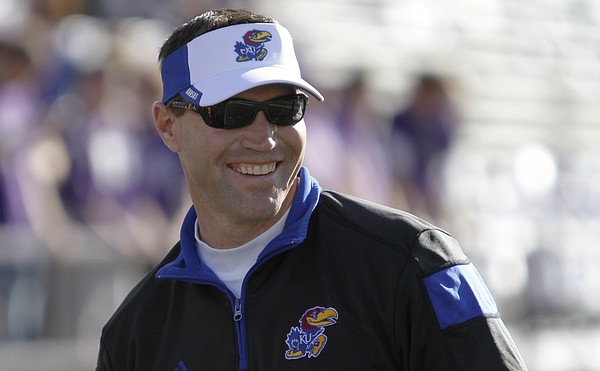 Gool ol Bill Miller number 1? If so I like it.

Bill Miller #1 because you and many others have known for quite some time he is the only option for interim.

Each time an article is written like this, someone needs to provide a comment about the inappropriateness of this writer's work. We are in the middle of the season where many of us care about the players and coaches. Leave the personnel work to the new AD. I am disappointed in this writer's continued weary writing.

This is a sports blog, not a cheerleading section for any particular group. Many on here don’t look at it that way. Does a news reporter take pity on the subject of the story, or do they report every detail?

Go to Jayhawk Slant. They're the best cheerleaders for all KU Sports. Beaty could go 5-326 and they'll still say he needs more time.

You run a fan girl twitter page for ku sports. You run a website where your information is hardly ever correct. You thought Peyton Bender would throw for 2k yards this year. You said Steven Sims was going to go off in a game he had 47 receiving yards on 3 receptions.

You are in no place to rag on the best place for quality inside information on the football program. The slant is the only website with a community that is even bearable and 90% are ready for Beaty to be gone three weeks ago.

I know you've really struggled to understand the concept of being a Jayhawk so I understand your attack towards the members of the slant. But a very high majority of those people walked through the campanile, trucked up the hills and worked their butt off in class. Something you can NEVER say about yourself.

I was waiting for your response. Lol

Still calling people bro huh Bryson. Act your age, oh wait you are. You dare to call out anyone after your KU by 17 over NichSt prediction? Such a munch.

In all fairness, he's said KU by 17 in every prediction this year

You don’t read much slant work, do ya?

lmfao the Jayhawks only filter must have blocked him out.

I was just trying to get a rise out of Bryson. He reacted like a child as expected.

Clint did give us the Iowa State win which I am very thankful for. If he can deliver a W over the cyclones again he gets my vote.

I wonder whether Clint would say "Yes" to the Interim Head Coach Job. He might say "No" because of previous history and the Fact he already has a Full Plate to Tackle.

Clint already wears 3 Hats for KU, you can partially blame Beaty for Piling On on the Jobs. #1 , Clint is the Defensive Coordinator. #2, Clint is the Cornerbacks Position Coach. #3, Clint's Title includes the Words "Assistant Head Coach"!

These articles serve no purpose what so ever. They are not helpful to the university, the players, coaches or fans. Let's just name Jeff Long as interim coach. He has some assistant coaching experience, was a quarterback in college and has been around some very good football programs. (tongue in cheek)

Bowen needs to go with beaty